How to Choose the Best Fly Reel for Bass 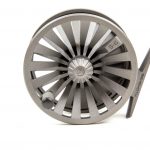 How to Choose the Best Fly Reel for Bass

Most people think of tournaments and conventional fishing gear when they think of Largemouth and Smallmouth Bass. Sure, Largemouth Bass are fun to catch on a crankbait or a topwater frog... But they're also really thrilling to catch on a fly rod. We've already covered how to choose a fly rod for Bass, but what about the right fly reel for the job?

A fly reel can be the difference between landing a trophy Bass or losing one. Bass can be heavy, strong, and mean. So a reel with enough drag to stop a charging fish is a must. And, in prior posts, we've also talked about durability and retrieval rates. For Bass, durability doesn't matter as much... but we'll get into that.

Let's start with the basics. It's necessary to match the size of the reel to the size of the rod you're using. This may seem intuitive but it's worth mentioning: if you're fishing an 8wt fly rod (and an 8wt is the most popular rod choice for Bass), choose a 7/8 or an 8/9 sized fly reel.

For aggressive freshwater fish like Bass, any reel you choose should have a strong drag system. If you're targeting small trout on a backcountry stream reel drag is unimportant; that's not the case with Bass. These predators eat aggressively, fight hard, and require a drag system that's strong and capable. It's also important to consider retrieval rates and durability when choosing a fly reel for Bass. But how much is enough? Does buying the most expensive reel on the market make sense for Bass? Let's dive in.

Drag (and when it matters)

Drag matters. Of course, if you're an angler you already know drag is important. Drag helps you stop a fish, turn it around, and bring it to the boat... every angler's primary objective after the hook set. But how much drag do you need for Bass? Does paying a bunch of money for the reel with the absolute highest max drag make sense?

It depends. And, in most cases, I'd say buying the reel with drag strong enough to stop a truck isn't necessary. There are stronger fish out there, especially in saltwater, that require the strongest drag system on the planet (seriously, a cheap reel will burn up and fall apart on a GT). For Bass, however, a huge max drag and the latest in sealed drag technology is nice but not paramount.

So which reel has a drag system that's good enough? For Bass, technically you could wrangle a fish on most reels, although I'd stay away from click-and-pawl reels without a drag system. The Redington Behemoth Fly Reel is a great option with solid drag and quality cast construction. Higher-end machined reels like the Hardy SDSL Fly Reel, Orvis Mirage USA Fly Reel, and the Ross Evolution LTX are also more-than-capable of maximizing your chances of stopping and turning a big Largemouth Bass or a sporty Smallmouth. And, these reels are more durable... which is nice but is it really important to buy the nicest Type III Anodized Aluminum machined reel for Bass?

Durability (and why it's nice but not important in every scenario)

If you've done any fly reel research you've probably read about the difference between reels built with a cast construction and reels built with Bar Stock Aluminum and a machined finish. There's a big difference, no question. And in many cases, it really does make sense to upgrade to a more expensive reel with a stronger and more durable finish. If you're climbing boulders in the New Zealand backcountry or navigating slippery rocks on the Maine coast, a durable reel will save you time and money when dropped or dinged. For Bass, however, it really doesn't matter. And here's why.

Carpet protects reels that are dropped or dinged so it really doesn't make sense to spend a ton of money on a machined reel if you're fishing out of a carpeted boat. If your boat doesn't have carpeting and you're clumsy (like I am), maybe it makes more sense to get a machined reel. Finally, we recommend machined reels for rocky riverbanks if you're a Smallmouth chaser. But you could probably get away with a cast reel if you're the careful (and non-clumsy) type.

Yes, retrieval rates matter when fly fishing for Bass (and most species for that matter). The industry's creation, and strong bias toward, large arbor reel designs is indicative of the importance of a reel's ability to pick up line quickly. Large arbor reels sacrifice backing capacity for a wider spool diameter and increased retrieval rates. For Bass, this trade-off is to the angler's advantage.

Bass generally don't peel out hundreds of yards of backing. They're just not that strong. Maybe a particularly large Smallmouth will run you in to your backing but Bass don't necessitate maximum backing capacity. That means a large arbor fly reel is the best tool for the job. And a reel with a super large arbor is even better.

I've already mentioned the article about choosing a fly rod for Bass but if you missed it, find it here. This article is really worth reading, especially if you're trying to put together a rod and reel setup for Bass.

Another resource worth referring to here is our 2018 8-Weight Fly Reel Shootout and Review. If you choose an 8wt rod for Bass, the best reels will be listed and described in detail in this shootout.

Ok, I know what I'm looking for. Now, which reel should I go with?