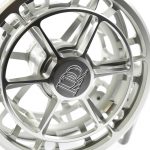 We’re starting to get into the very best saltwater reels. Enter the Ross Evolution R Salt: long name, amazing results. It’s Ross’s first true entry into the saltwater game since the Momentum was discontinued a few seasons ago. While the Momentum was kind of a meh reel, they’ve done tons of R&D and this reel is a game changer. 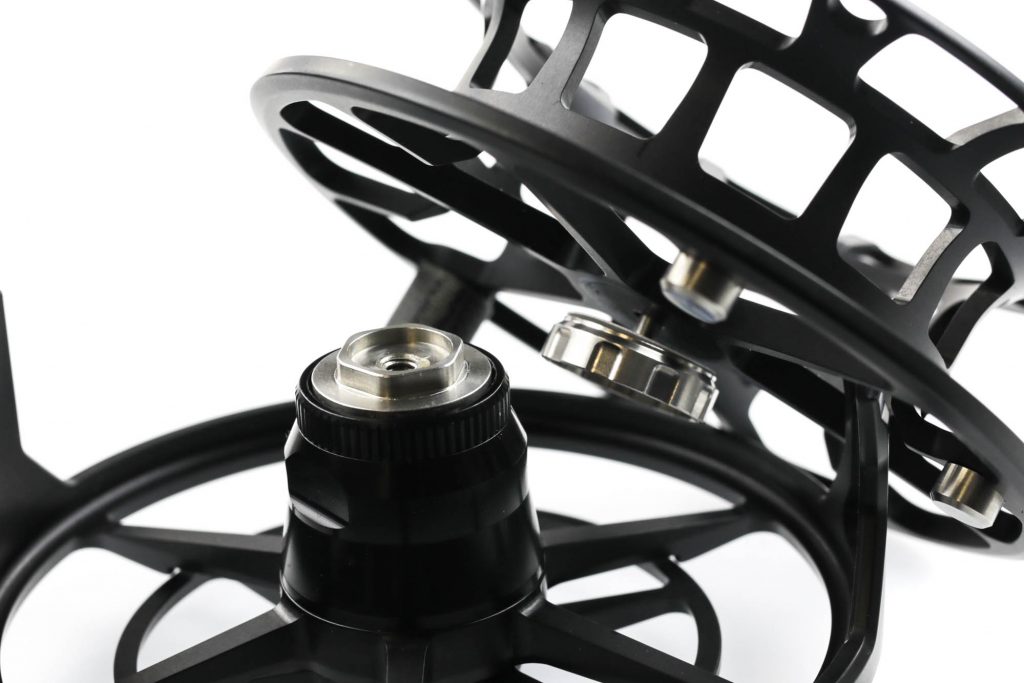 The drag on the Ross Evolution is MASSIVE! I don’t know how they managed to pack so much power into such a small package, but they’ve done it. The R Salt boasts a massive 23+ lbs of max drag. It beats out every system out there except the Abel SDS (which I believe is also the same drag system due to a nearly identical amount of torque), with its smaller arbor. As you’d expect, it’s right there on the effective drag as well with over 11lbs. Unfortunately, this drag is highly non-linear. At the halfway mark, we’re only seeing about 1.6lbs or 7%. On the bottom end it stops at a, not too bad .15lbs.

The drag systems on the 7/8 and the 9/10 are virtually identical, so I’ve discussed the 7/8 size only. It has a little more drag out due to its smaller arbor, but everything still applies to the larger 9/10 reel as well.  Check the chart for the exact specs. 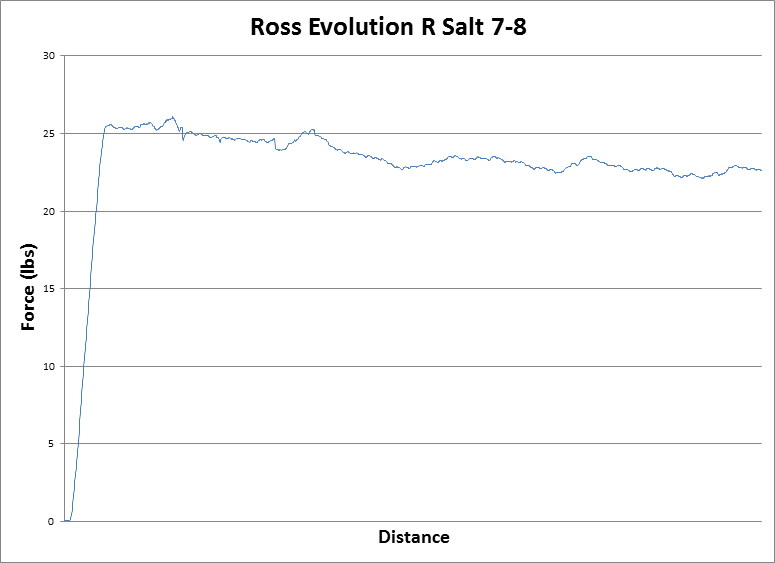 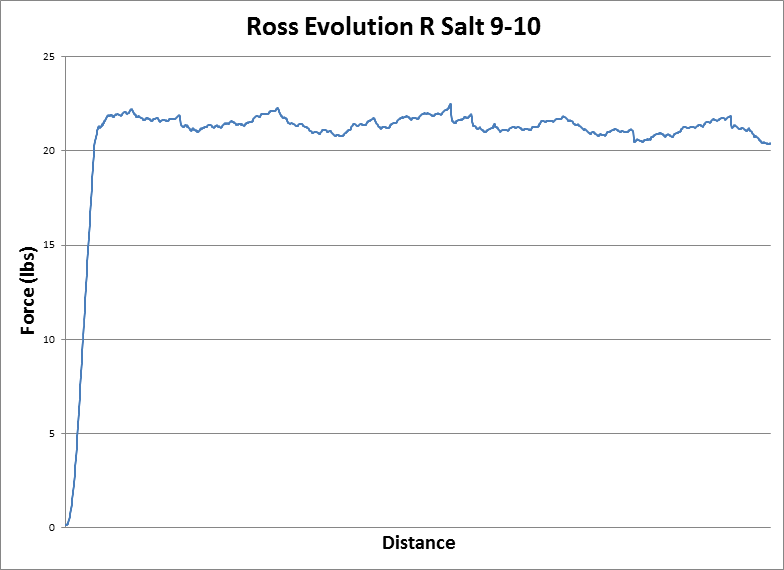 The R Salt has a nice sound, but it’s definitely not as powerful as I’d like on either the incoming or outgoing.

Both the 7/8 and 9/10 have pretty fast retrieval rates, but the 9/10 really shines in its spool design. It’s in the top 5 in line pickup and has a massive capacity.

Since Ross and Abel have been under one parent company umbrella, Ross has taken the minimalist route. The R Salt comes in just two colors: black and silver. That’s fine by me. It’s got a great handle as well.

Probably the most thought provoking part of the reel is the drag knob. No, it won’t break your fingers if a fish is running with the drag unless you’re really trying hard. I had a 35lb roosterfish on and I can tell you that you can still adjust the drag plenty with a fish running. Needless to say, while the drag knob looks awesome (and you can palm it if you’re wearing mittens ¯\_(ツ)_/¯ ), it isn’t *quite* as functional as the big drag knob on say the Nautilus CCF-X2 – if for no reason other than it takes some getting used to. 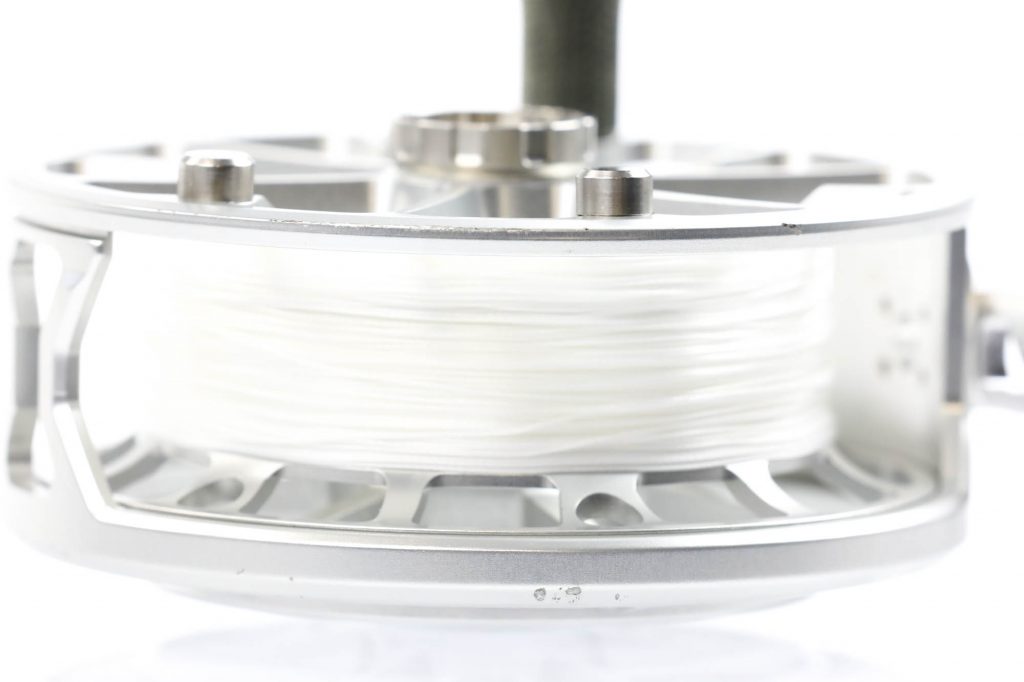 The finish on the R Salt is solid. As with most of the reels we’ve tested, the silver color held up to dragging better than the black. Both did well when dropped.

Both reels feature ported reel seats. As we’ve seen, these bend when dropped at the wrong angle much more often than non-ported seats, so the reels lost some points here as well.

Lifetime to the original owner + $30.

The Ross Evolution R Salt is a really, really nice saltwater reel. So, I ask myself “why didn’t it win?” The answer is not obvious, but a few little things took away enough points to knock it off the podium. It's a lighter reel than our winner and has more drag, but it's got less adjustability and a drag knob that's a little unorthodox. It's a superb reel that is definitely worth buying if you are counting the grams and still want top notch performance.