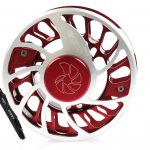 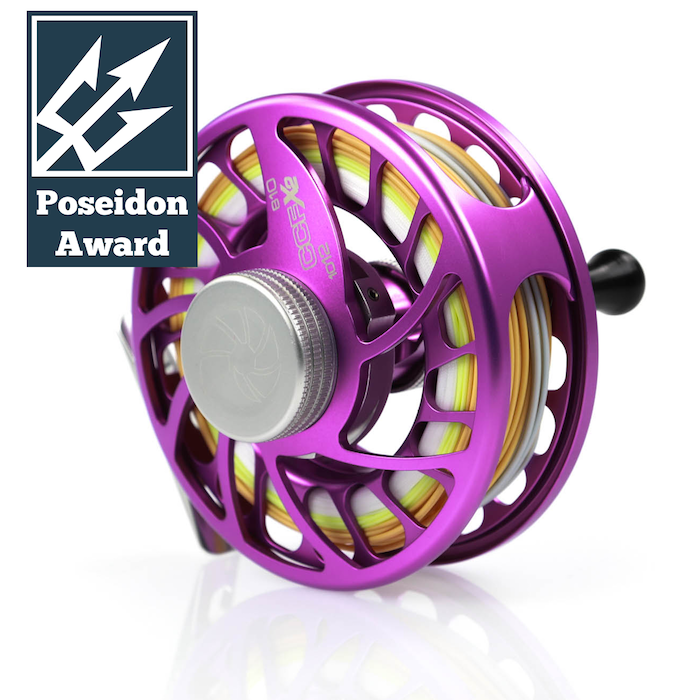 After much ado, it’s time to announce the winner of our 2018 8-weight Reel Shootout: The Nautilus CCF X2 8/10. The CCF-X2 replaces the old CCF as Nautilus’ mid-priced big game reel. Usually, mid-price comes with mediocre performance. Not so this time. The CCF absolutely crushes its big brother the NV-G, and takes the top spot in our shootout. Here’s why we love this reel so much.

We are going to be discussing the 8/10 as it was the winner of our shootout, but the 6/8 is very similar and also excellent. Please check out the chart from the shootout to fill in the gaps that aren’t addressed.

9.3 ounces for the 8/10 and 7.9 ounces for the 6/8. One of the few downsides of this reel is its weight, but it makes up for it in other ways. Interestingly enough, there seems to be some variation in weight as the one that I’m fishing with is half an ounce lighter. 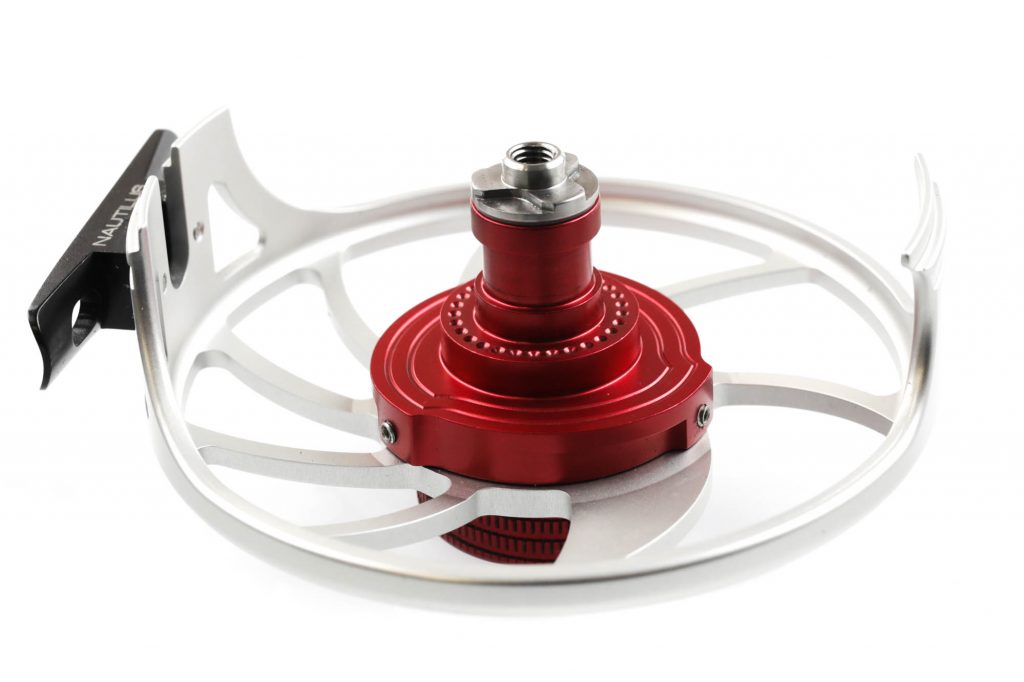 You can’t have a great reel without a great drag and the CCF delivers bigtime. It maxes out at a massive 15.6lbs. When you back it off ¼ turn you still get a sweet 7.9lbs of effective drag. From here, the drag is fairly linear, despite only having 1.5lbs at the midpoint. This is because the drag on the CCF has 6 full turns. So you’re getting 2.75 turns between 1.5 and 8lbs which is some ridiculous adjustability in the key usable range of drag – way more than any other reel. If you were to turn it all the way to the bottom, you would get some free-spooling with a mere .06lbs, but because of the sheer number of turns, and the linearity of the drag, you would really have to try hard to do this that we couldn’t reasonably take away too many points for this.

The other downside to the CCFX2 is the number of drag turns. We didn’t evaluate the number of drag turns because we felt that this was a super personal choice and not something that we were willing to commit to assigning points to. That said, we would have preferred fewer turns on this reel. It would have been made somewhat better if Nautilus had added a hard stop at say 4 turns of the knob instead of 6. 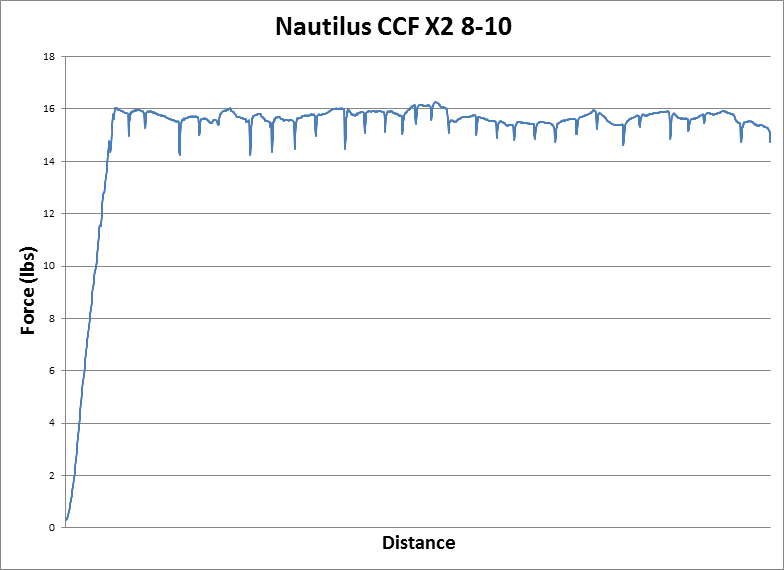 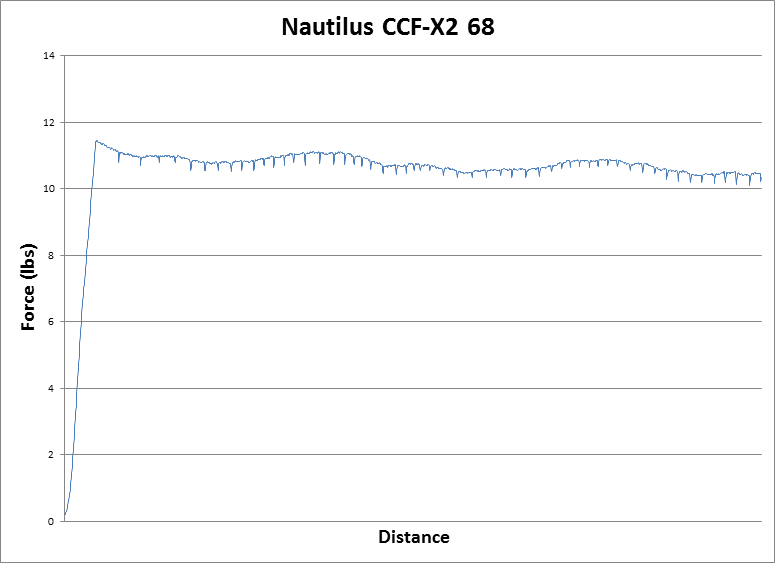 Another thing we really liked about the CCF was how it sounds. Nautilus has not traditionally made great sounding reels, but they delivered big time on the CCF and it sounds great in both directions.

The CCF also has some wicked fast retrieve. With 200 yards of backing you’ll get a respectable 9.9” per turn, however when filled to properly fit an 8-weight, you’re looking at over 10”! Which is a nice Segway into saying that this reel has great capacity. It’s not only a really nice 8-weight reel, but it also works for 9-weight lines without any special backing (no surprise since it’s an 8-10). It achieves all of this with a sub-1” wide spool.

Obviously the CCF looks great. It’s a Nautilus. If the standard black or silver isn’t enough for you, you can order it up in a dazzling array of color combinations that will really make you stand out on the water. Ergonomically speaking, the CCF takes the top spot. It’s got our favorite handle (which it shares with the NV-G) as well as the finest drag knob out there. It’s not only large and thick enough to grasp easily, but it’s covered in a great texture giving you added grip.

Finish and durability is not the strong suit of the reel. The CCF definitely got beaten up when we dropped it. The drag test also showed up. Finally, the reel foot is ported and the reel lost some points for that as well.

Lifetime to the original owner + $45.

As you read this review, you might be asking yourself how this reel ended up winning the shootout. It’s a fair question, but if you’ve been reading our shootouts for a while, you know we’re always scrutinizing the products we really like.

The Nautilus CCF-X2 has really excellent performance across the board. It’s got a top quality drag, a very fast retrieve, and the best ergonomics. The biggest downside to the reel is weight, but all of the top competitors were also quite heavy, so it washed out. The CCF edges out all the other reels by just being a little bit better in a lot of categories and those points add up to a superb and very well-rounded reel.