How to Choose the Best Fly Rod for Pacific Salmon 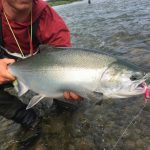 How to Choose the Best Fly Rod for Pacific Salmon

The Northwestern US, Northern Coast of Canada, state of Alaska, and parts of South America offer the opportunity to target 5 species of Pacific Salmon with a fly rod. Salmon are known for their commercial fishing value, but they also put up a great fight on a fly rod. After spending months guiding in Alaska, I'm familiar with the nuances of choosing a fly rod for the different species of Pacific Salmon. It can be tricky. No one fly rod setup is optimal for all 5 species, so I'm here to provide tips, techniques, and fly rod recommendations for each species individually.

The King Salmon (Chinook Salmon)  is perhaps the most popular of the 5 species. King Salmon can grow up to 80 lbs and are typically caught by swinging streamers. If you’ve never fished for Kings, imagine an 80lb fish on the swing… ‘Toto, I have a feeling we’re not in Colorado anymore’. But seriously, these fish are massive and massively fun to catch on a fly rod.

Big fish call for a big rod, a theme you’re familiar with if you’ve been keeping up with our species-centered fly rod posts. Kings are up there with some of the largest fish you can catch on a fly rod, especially in freshwater (although they can be caught in the Salt, too), so a large rod makes the most sense. If you prefer a single-handed rod, a 9’ or 10’ 9-10wt rod has enough backbone to turn these fish in heavy current and enough lifting power to bring them to the surface.

Because they’re usually caught on the swing, Kings often attract two-handed anglers, too. If you prefer swinging streamers with a Spey rod, the King Salmon may become your new favorite species. Spey rods are hugely efficient when targeting Kings because they make distance casting easier and less fatigue inducing. After all, arm power should be saved for fighting Kings not wasted casting for them. For Spey rods, 13’ - 15’ rods are optimal in a 9-10wt model for larger rivers, and 12’-14’ 8-9wt models work well on smaller rivers. 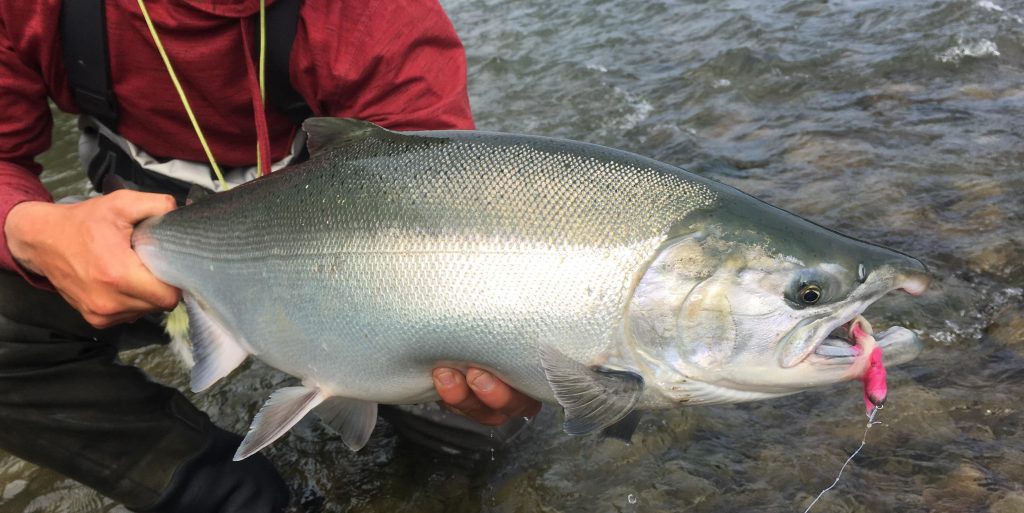 Another popular Pacific Salmon is the Silver Salmon (Coho Salmon). Although generally much smaller than Kings, Silvers have a particular affinity for charging down streamers and leaping into the air. Silver Salmon fresh from the ocean are insanely strong and incredibly fun to catch on a fly rod.

For Silvers, use a smaller rod. Silver Salmon can reach weights up to 20 lbs, but a 10wt is overkill. Because a Silver Salmon is smaller than a King Salmon, a solid 9’-10’ 8 or 9 weight single-handed rod is the best tool for the job. Choose a rod with a quality fighting butt and a strong butt section for increased lifting power; Silvers may be smaller than Kings, but they sure are mighty.

A Chum Salmon is a sort of size split between Silvers and Kings. Chums typically weigh in around the 20-30lb mark with thick shoulders and a deep body. While Chums aren’t as aggressive or as active as Silvers, their size can be hard to manage in strong currents. Think of these fish as more like ‘dead weight’ in the water. They’re definitely strong, just a bit different than Silvers.

People often use the same fly rod to target Silver Salmon and Chum Salmon. There’s nothing wrong with using an 8wt single-handed rod for both species. That being said, if you want to upgrade to a 9wt when targeting Chum Salmon on a large river, your arms will thank you for it at the end of a week-long trip.

Finally, I’ve grouped Pinks and Sockeyes together for a few reasons. First, Pinks and Sockeyes are similar in size and the smallest two species of Pacific Salmon. Second, they’re targeted with the same technique. Because Sockeyes and Pinks don’t really eat when they’re in the river, the only way to catch them is to trigger a defensive strike. This is often done using a streamer.

Similar to Silvers, Sockeyes are incredibly strong and capable of reel-screaming runs. Again, a strong, durable rod with a stout butt section is the optimal setup. 8wt single-hand rods are great for fighting Sockeyes from either a raft or the bank.

Pinks tend to be slightly smaller than Sockeyes and less likely to peel out a bunch of fly line. That being said, they’re still fun to catch and their hump (hence, the nickname humpy) makes the males particularly photogenic. You can probably get away with a 6wt when fishing for Pinks but be careful. It may take a while to land an unintentionally hooked Sockeye on a 6wt.

If you're wondering about fly reels for Salmon, check out our post about How to Choose the Best Fly Reel for Salmon here.

Categories: Other & How To
Tags: saltwater fly rod
Posted By: Chandler C