How to Tie the Feather Game Changer Streamer 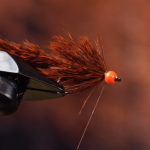 How to Tie the Feather Game Changer Streamer

The Feather Game Changer is one of our favorite freshwater streamer patterns here at Trident. This fly works well when tied with a stinger hook or without for bass, trout, and pretty much any freshwater fish. Here Jared ties the streamer in a Crayfish Orange color to imitate a sculpin or any other small freshwater baitfish. This pattern moves incredibly well in the water and is sure to grab the attention of a brown trout lurking in the shadows.

Begin by placing the shortest Articulated Fish Spine in the vise and starting your thread. Cover the gap in the Fish Spine to seal off the back half of the shank.

Create a tail by grabbing some whispy hackle off of the hackle patch and tying it in at the back of the shank. Tie a single feather in on both sides of the hook shank.

Repeat Steps 1-5 on the third shank. Choose hackle feathers that are slightly longer than the feathers on the second shank to create a nice body taper on the fly.

Put the Stringer Hook in the vise and add an orange bead. Attach the articulation wire by looping it through the eye of the third shank and tying down one side at a time on the shank of the hook. Tie the wire forward then double it back for increased durability.

Repeat Steps 1-4 on the final section of the fly using the largest hackle feathers. Finally, whip finish and reinforce the tie-in point with superglue.

And that's the final Feather Game Changer Streamer Fly. Jared tied this pattern in a very basic color scheme but flash and different colors can be added depending on what kind of baitfish you're trying to imitate. This is a phenomenal streamer pattern for fall trout who are looking for a big meal and bulking up for the winter months.