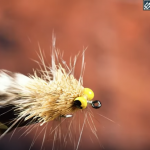 Learn how to tie the Chernobyl Crab including step-by-step instructions, a video tutorial, pictures, and much more. Improve your fly tying skills here.

Pack your tropical gear we're going on a Permit trip! Kidding... kind of. If you do find yourself preparing for a trip to the tropics this winter, however, the Chernobyl Crab is one of the best patterns to bring with you. Why? Because it's simple to tie, highly effective, and is tied on one of the sharpest saltwater hooks that exists. Whether you're headed south this winter or you're bored tying lame trout flies, take the time to tie this one. You'll be glad you did.

Tie in the tan Maribou 'tail'. Measure the Marabou so it's roughly the length of the hook shank and tie it in right at the bend of the hook. Twist the Marabou and cut off the excess.

Select four feathers of Variant Hackle and tie then onto the hook, two on each side. Select two that are larger and rounded and two that are smaller and more pointy to imitate crab claws. Tie them facing away from each other and so when the hook swims with the hook point up the feathers are also angled upward.

Tie in the first clump of Deer Hair. Cut a clump of hair that's a little thicker than the diameter of a pencil and strip out any errant hairs. Stack the Deer Hair either in a Hair Stacker or in your hand and tie it in on the underside of the hook. Catch the Deer Hair with two loose wraps then tighten down on the thread to flare the hair.

Tie in the second chunk of Deer Hair. Choose a clump that's a little thinner than the last clump and tie it in on top of the hook shank. Again, catch the hair with two loose wraps then pull straight down to flare the hair. Advance your thread to just behind the eyes.

Tie in the third chunk of Deer Hair. Tie this chunk in at a 45-degree angle with two loose wraps then spin the deer hair around the hook shank. You can use your off-hand to help the Deer Hair around the shank. Again, advance your thread up past the eyes.

Trim the sides of the crab, too, to make the profile more circular.

Finally, wrap the hackle (legs) up through the Deer Hair trying not to catch too many fibers. Tie the hackle off right in front of the eyes and snip off the excess hackle.

Trim the hackle to keep the flat profile of the fly. Throw a whip finish and add superglue to increase the durability of the fly.

And that's the Chernobyl Crab. This pattern was originally tied by Tim Borski and is a great pattern for Permit, Bonefish, and any other crab-eating fish. The Dumbbell Eyes help the fly sink efficiently and quickly drop into the fish's feeding zone. Don't go on a Permit trip without one of these in your back pocket.