How to Tie the Hollow Fleye Squid 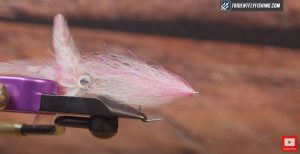 How to Tie the Hollow Fleye Squid

Learn how to tie the Hollow Fleye Squid pattern including step-by-step instructions, a video tutorial, pictures, and much more. Improve your fly tying skills here.

Start the fly by tying in 6 Strung Hackle Feathers. You should prep these feathers before tying them in by coloring them with markers. Tie them around the Hard Mono so they're equally spaced out to appear as tentacles. These feathers will give the fly extra movement in the water.

Next, create a dubbing ball to glue the eyes onto. It's difficult to glue eyes to a single strand of Hard Mono so this will give you some bulk to secure the eyes.

Glue the eyes onto the dubbing ball, one on each side of the fly.

Fill the space between the eyes with UV Clear Fly Finish to further anchor the eyes in place.

Remove the Hard Mono from the vise and tie the Mono onto the hook shank. Create a small tie in point to make it easier to spin the Deer Hair later then reinforce the thread wraps with superglue.

Next, add Ice Wing Fiber to give the body some color and flash. Again, tie the Ice Wing Fiber in so it spins around the hook shank then push the fibers rearward and use your thread to anchor them in place.

Begin tying in Deer Hair with a hollow tie. Capture the Deer Hair with a reverse tie and spin it around the hook shank. After it's fully distributed around the hook shank, use a hollow pen casing to push the fibers rearward and pull your thread through at a 90-degree angle. Continue stroking the fibers back as you create a cone with your thread to keep them facing rearward.

Repeat Step Eight just behind the eye of the hook.

Repeat Step Eight with Ice Wing Fiber right behind the eye of the hook. Throw a whip finish and you're done! That's the Hollow Fleye Squid, a great pattern for Striper fishing and targeting other saltwater fish that feed on squid. While there are a few moving parts to this fly, it's relatively repetitive so once you get the hang of it it becomes relatively straightforward.