How to Tie the Black Gnat Dry Fly 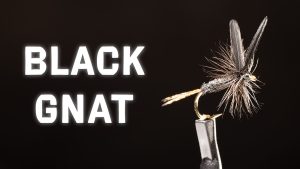 How to Tie the Black Gnat Dry Fly

Learn how to tie the Black Gnat Dry Fly, including step-by-step instructions, a video tutorial, pictures, and much more. Improve your fly-tying skills here.

Black gnats and midges are prolific on most streams and play a significant part in a trout’s diet. As David Klausemeyer, Editor-In-Chief of Fly Tyer Magazine, matter-of-factly points out, “Show me a piece of trout water that does not have its share of little black insects fluttering across its surface, and I’ll show you a stream not worth fishing.” Several versions of this fly are out there, but this is our favorite. Follow along as Karl gives step-by-step instructions on how to tie the Black Gnat pattern.

Begin the pattern by establishing a thread base, running the thread from below the eye to the hook’s point.

Next, we’ll tie on the Black Gnat’s wings by pinch-wrapping two hen neck feathers on the shank. Rewind the thread to the point, then clip the excess rearward-facing fibers. The feathers should now run parallel to each other and extend past the eye.

Pull the hackles rearward, then build a thread dam in front to push them upright. Make figure-eight wraps between the feathers to separate the wings further.

We are now moving onto the tail section. Run the thread to the hook’s bend, then secure several Coq De Leon tail fibers perpendicular to the shank. Advance the thread, then clip the forward-facing excess.

Start the Black Gnat’s body section by stacking five pheasant tail fibers on one another, then tie them on near the bend by the tips.

Finish the body by pulling the pheasant tail fibers upward with your hackle pliers, and rotate the material around the shank with overlapping wraps. Once you’ve reached the wings, secure the fibers, then clip the excess.

The dry fly hackle is the last material we’re tying in. Prepare the hackle by removing some fuzzy fibers from the tip, then secure it on the shank’s side below the wing.

We’re not finished with the hackle quite yet. Wrap the feather four times before the wing, and four additional turns in front of it, then clip the extra material.

Finally, build up a quick head with the thread, then complete a whip finish. The Black Gnat is now ready for some trout action.