How to Tie a Pat's Rubber Legs Fly 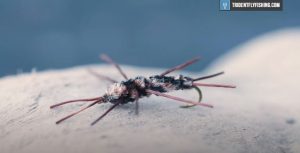 How to Tie a Pat's Rubber Legs Fly

Learn how to tie the Pat's Rubber Legs fly pattern including step-by-step instructions, a video tutorial, pictures, and much more. Improve your fly tying skills here.

If you've spent any time fishing the western US, chances are you've heard/fished a rubber legs. These unassuming, simple stonefly patterns feature a body and legs - that's it - which means they're incredibly easy to tie. Even though they're really simple, trout in the western US feed on large stoneflies under the surface all the time so they're always looking for one of these. This is also a great guide pattern, searching pattern, and dropper. Tune in as Jared provides step-by-step instructions to tie this widely-used pattern and be sure to watch until the end when he gives some lesser-known advice about how to make this pattern even more realistic.

Start your thread and anchor the wire to the hook shank. Take open wraps over the top of the wire down and back up the hook shank several times until the wire is anchored in place.

Next, tie in the tail of the fly. Start by tying one long strand of Flex-Floss in on the near side of the hook shank then wrapping it over top of the hook and tying it in on the other side. Trim the excess so the two sides are equal in length.

Strip some of the fibers off of the core of a piece of Varigated Chenille and tie it in just in front of the tail. Wrap rearward to anchor the Chenille in place then wrap your thread 3/4 of the way up the hook shank.

Tie in the legs of the fly. Choose three strands of Flex-Floss and tie them in right on top of the hook shank. After securing them to the hook shank, position the legs so there are three on either side of the shank and keep them in place with figure-8 wraps. Once the legs are attached, return your thread to just behind the eye of the hook.

Wrap the Chenille forward taking touching turns. When you get to the legs, pull one set of legs back and take a wrap in front of them. Then pull another set back and wrap forward. Do the same with the third set so the legs are separated by a wrap of Chenille each. Tie off the Chenille right behind the eye of the hook and cut off any excess material.

Trim the legs to length. The easiest way to trim the legs is by trimming the antenna first then pulling all of the legs on the body down and cutting them at the same time. Then trim the tail.

Use your scissors to trim the body to create a small taper. Trim only the back end of the fly to make it thinner than the head. This isn't a necessary step but it's one that gives the fly a more realistic profile in the water.

And that's the Pat's Rubber Legs! It's a really easy pattern to tie and you can tie several in one sitting. It's a really productive Stonefly nymph in the western US during the spring and summer months.