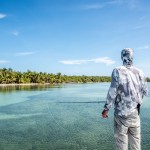 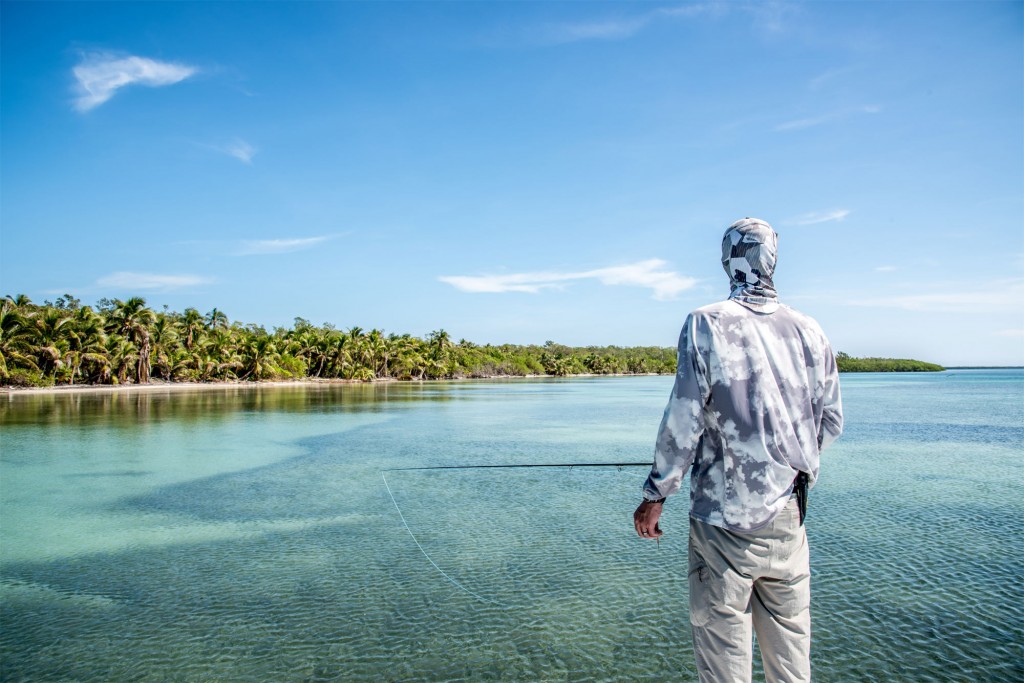 I recently spent a week fishing Turneffe Atoll, Belize in preparation for a hosted trip I have scheduled in April. I stayed at the Turneffe Flats lodge, which is located on the northeast (Caribbean) side of the atoll, and is situated in perfect location for easy fishing/diving access. “Flats,” as it’s nicknamed, is even stationed right along a home flat which would hold bonefish and at times permit and triggerfish during various times of the day. Most days, either early morning or when I returned to the lodge in the evening, I would see tailing fish feeding no more than 40 feet away. So, right off the bat the location seemed great. I was anxious to see what the rest of Turneffe Flats would show me.

After a good night’s sleep in a well air-conditioned room, we gathered in the main lodge for a fishing orientation. (Those that were there to scuba dive or take the atoll-adventure tour met separately). The fishing orientation consisted of everything from what to expect in terms of fish, proper clothing/apparel, keeping safe/hydrated, how to (not trout) set the hook, to the best ways of interacting and getting the most from our guides. After that, we loaded our gear into the boats...

I have read a lot about how great Turneffe Atoll and specifically Turneffe Flats is in the past, but this exceeded my expectations. Our daily routine, which we had complete freedom to adjust at any given minute, was to mainly chase permit first thing in the morning. (You can also arrange with your guide to schedule time in the early morning before breakfast to search for rolling tarpon). Some days we saw 10 permit. Some days over 40-50. But everyday we had at least a couple "shots," some days we had 10+ solid shots. Like most days of permit fishing, we gave it our best and if nothing prevailed, we would then motor over to another one of the seemingly endless flats to chase bonefish, or whatever else happened to come in with the tides. Usually at this time we would get out on foot and wade around - this also helped stretch our legs a little after hours on the boat. 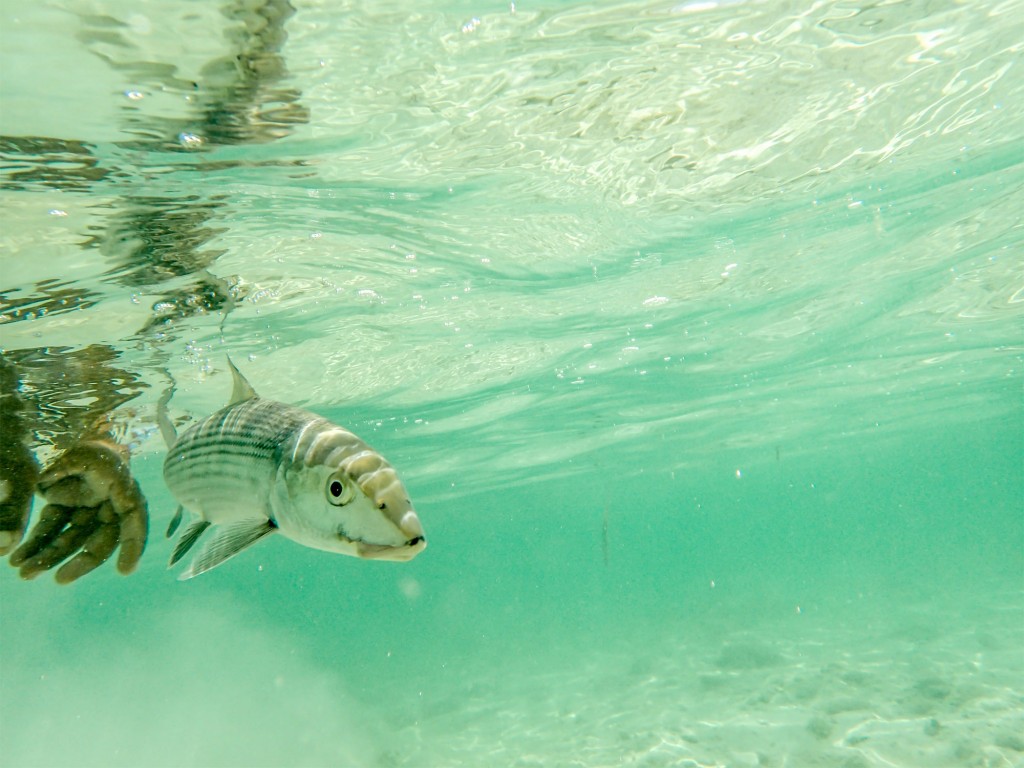 The bonefishing there is extremely good. We did not see many huge bonefish as the largest I caught was about 5lbs, but man were they all over the place! Healthy populations of bones would cruise the flats in either large schools, doubles, or sometimes singles. I even saw one of the elusive Turneffe golden bonefish. Most of the time they were more than willing to take a well presented fly, but sometimes it took some changing of flies to see what they would key in on. Some people say this is largely due to the abundant amount of food on the atoll and the fish become picky. Earlier in the day, after getting heart-pounding follows from a permit without a take, it was good to freely walk around a flat and listen to our drags sing. The amount of spotted eagle rays we saw too was not only really cool to witness, but a great sign that the flats were healthy and full of life. 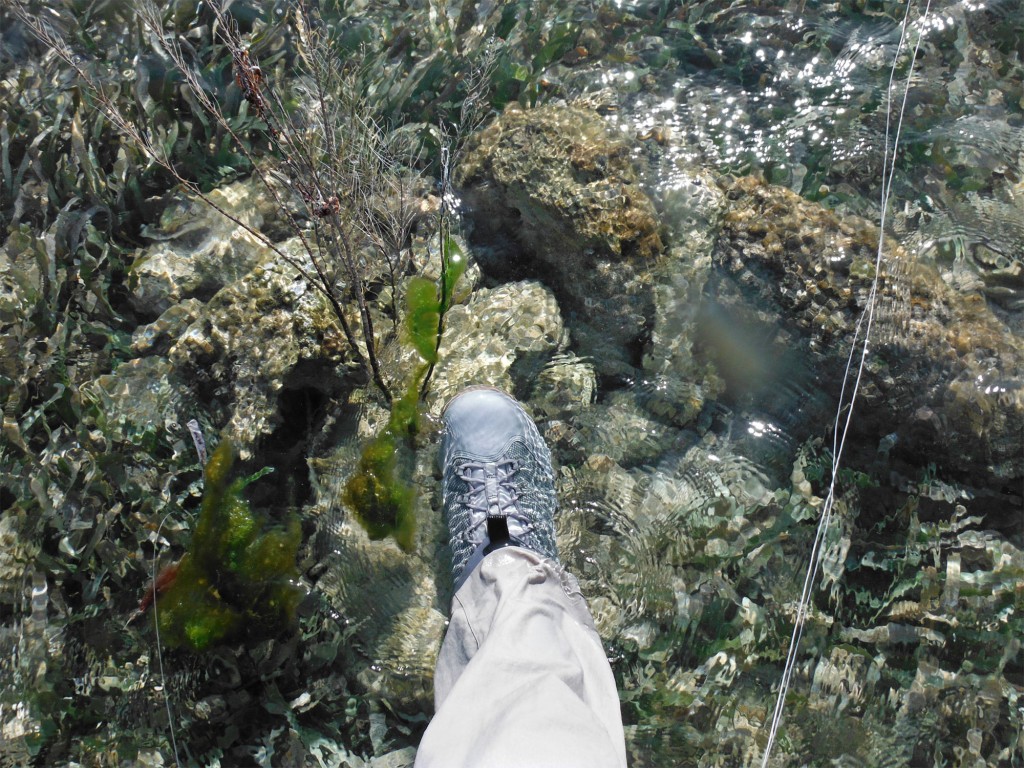 Looking down while wading Photo: J.Thelin.

The flats along the ocean side of Turneffe are mostly coral. When I was there it was shortly after hurricane Earl had done its damage, so there was actually more coral than normal that had washed up as a result. This presented a slightly more challenging wading environment and made me thankful I packed a pair of lace-up wading boots. The coral also made the fishing a little more difficult as it was common to lose a bonefish during its first big run while it dragged you over large chunks of coral, some even sticking out of the shallow water. 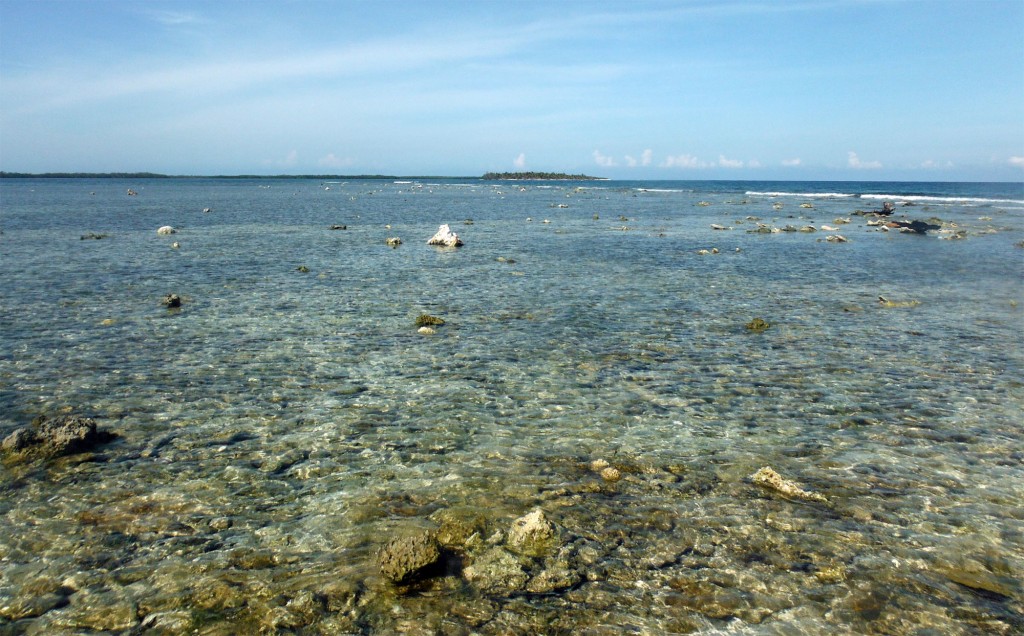 Looking out across one of the ocean side flats. Photo: J.Thelin.

We also did some blind casting for big tarpon in the deep channels if we were in the mood. We did see some resident tarpon during our days with some good shots at sight fishing for those, but no takes. I have a feeling if we set aside a day to only look for resident tarpon we would find a lot. A guest that was there did hook and jump a 100+lb silver king, but unfortunately he did not land it. I had one day where two 30-40lb tarpon appeared out of the mangroves while we were stalking a school of permit in the same area. The tarpon on one side of the boat, the permit on the other. I have never been so conflicted and confused on a flats boat in my life!  My guide kept me calm and we didn’t spook either giving me a chance at both.

Late in the week we came across a school of permit that were tailing along some mangroves. After a few changes to my crab fly and adustments to the leader, I was able to coax this beautiful Turneffe local to the boat.

We finally agreed on a particular crab pattern.

Along those same lines, I’d like mention a quick take on the guides at Turneffe Flats. I fished the whole week with Dion. Dion is a local of Turneffe Atoll and grew up commercial fishing for lobster with his brother and father from a small island in the southern section of the atoll. His older brother Dubs is a guide at Flats and so is his uncle Pops (both well known Turneffe guides). To say that Dion knows that water is an extreme understatement. Depending on wind, tide, weather, sunlight, time of day, Dion always had a plan. But not only was he knowledgeable of the area, he was patient and unbelievably good at getting you quality shots at fish. I instantly felt comfortable with him and the more the week went on, the more I learned and better I felt about my tactics and technique. Sometimes when fishing with guides, you get the impression it’s them that has an agenda to accomplish. That was not the case with Dion. He wanted to succeed in whatever you were looking to do. It’s the little things that separate the good from the great. Dion was great.

The first thing that was clear from the initial boat ride out to the lodge was the quality and friendliness of the staff. Everyone had smiles on their faces and were more than willing to answer any questions and help in any way possible. This only grew when we arrived and got to meet everyone else. From the owners (Craig and Karen Hayes), to the guides, kitchen staff, housekeepers, and grounds keepers, everyone at Turneffe Flats was incredibly kind and skilled in their endeavors. They were still suffering damage from hurricane Earl which had passed through only weeks prior. Their dock has been recently repaired and now fully functional, and the sea wall took a good hit but was in the process of repair during my stay. As you walked around the property, you could see minor hints of the storm, but I think considering the high winds they had, everything looked quite well.

The other obvious thing was Flats’ wholehearted dedication to the environment and their fishery. Everything there was geared to be a fully self-sustaining lodge and to prioritize the importance of their natural surroundings. They were awarded the prestigious Green Globe Certification based on these efforts. Specialized water treatment, recycling/waste management, food, power generation, and engineering of the structures is of the utmost importance to Flats. In fact I fished most of the week with fly fishing photographer/writer Paul Smith who was on assignment from a magazine to write about Turneffe Flats’ unique approach to sustainability. I was lucky enough to get the “full tour” of the place on my last day and to see the behind-the-curtains details was very impressive.

Looking east over the home flat towards the Caribbean. A couple of anglers in the distance. Photo: J.Thelin.

After each day, whether you were there to fish, scuba dive, or join guide Abel in the eco-adventure tour, everyone would gather in the main lodge and talk about their day. They have a flat screen TV set up in the main lodge where people would load pictures and videos from the day and discuss what they saw, learned, or caught. One of the really special things about Turneffe Flats is that it attracts people from all over who share a common interest in the world around them. Although there are plenty of creature comforts there, a vast majority of those who travel to Flats arrive with a task. Whether it’s to fish, snorkel, dive, or explore, everyone who was in attendance had a strong passion for learning and appreciating what natural wonders Turneffe had to offer. I hope return many times in the future.

I have booked a hosted trip April 22-29th 2017 and YOU are invited!  I will join 7 others at Turneffe Flats lodge for a week. The beach side cabanas are reserved that sleep 2 each. If you or anyone you know is interested, have them contact me directly at - [email protected] or call the shop 888.413.5211

If you are interested in Paul Smith’s (amazing) photos, he can be reached at [email protected]