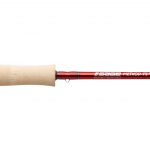 This year was full of great new product introductions. Great new rods came out from Winston, Redington, Hardy, etc. But I’m always waiting to see what comes off the bench of Jerry Siem from Sage. This year boasted two new releases: the Method, which replaces the TCX, and the all-new Motive, a “low” cost saltwater rod.

We talked about the Method’s release in an earlier post and many asked for a review… here it is – straight from iCast 2013.

“While it’s not going to scare any fish away, it may scare off a few anglers.” (tweet this)

Yup, it’s red. Really red. Even the rod tube is red. Sage calls it “Magma”. While it’s not going to scare any fish away, it may scare off a few anglers. Personally, I'm all about color - so I think it's great. Everything else is exactly what you’d expect from Sage: high grade cork, tight wraps and an immaculate finish.

The 8-weight Method comes with a full wells grip w/ fighting butt. The reel seat is black aluminum. Essentially, it’s identical to what you’ll find on the Xi3. For an $800+ rod, I would have liked to see

For the record, the 5-weight weighs in at 2.63 ounces, making it Sage’s lightest “all-water” rod.

As you would expect from Sage’s fastest rod, it’s a cannon. While I couldn’t cast it as far as Tim Rajeff did to win the IFTD casting competition, it was easy to get 80-90’ of line out.

Konnetic technology just keeps getting better. Unlike its predecessor, the TCX, the Sage Method brings A LOT more accuracy and feel in close. At 25’, it’s a little too stiff to really compete with the NRX in terms of accuracy, but definitely not bad, maybe even a bit better than the Xi3. The real surprise was how well the rod performs at 40’ – I was able to create nice tight loops and deliver them right on target. Finally, at 80’, it’s probably one of the best rods out there.

The Method is a much softer-feeling rod than the TCX was, but there’s no question that it’s super-fast. Since we’re talking about an 8-weight, it’s also worth mentioning that the rod doesn’t have the same stiff butt section that’s common on many saltwater rods.

The Sage Method will be ideal for anyone looking to toss big streamers or casting into a 15 mph headwind.

Lifetime – as everyone’s come to expect in this industry.

Price: We don’t have final pricing just yet, but you can expect it to come in well over the $800 mark for single handers.

I was never a fan of the TCX. Here on the east coast we fish a lot of small water, and we’re often making casts less than 40’. The TCX was not a rod for in-close action. The Sage Method fly rod is a massive improvement in this department. I think the Method will open eyes for anglers looking for a rod that makes distance casting easy for that trip out west, but can still be used at your “local” stream. Konnetic Technology FTW.

The 8-weight will make a terrific saltwater rod, particularly for those fishing any situation where blind casting makes sense, and you’re not expecting an accidental giant. I would also take it bone and/or permit fishing.

You’ll definitely want to make sure you load it with a Rio Grand or some other half-size heavier line to make all that power more manageable.