Read This Before Fly Fishing in New Zealand 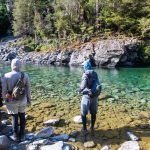 Read This Before Fly Fishing in New Zealand

“Whenever I get stressed I just want to hop on a plane to Queenstown.”

Well, not quite. Winter weather in Maine can be anxiety-inducing at times, sure. But it’s more drab and dreary than it is stressful. The best way to combat seasonal depression? As John Travolta astutely points out… hop on a plane to New Zealand. And that’s just what we did this February with fly rods in hand and expectations as large as John Travolta’s personality. So, was it the trip of a lifetime? Did it cure the nags of winter and the stresses of office life? Read on to hear what we learned and what you should know before you sell the family farm and travel halfway around the world for the best trout fishing on Earth.

Trident Fly Fishing is a full-service fly shop. We spend a lot of time testing gear and writing reviews to give you all of the tools to make your next trip a success.&nbsp; We are not a blog or a review site. 100% of our funding comes from your gear purchases, so if this blog post helps you on your next fly fishing adventure, please support us by buying your gear from us. 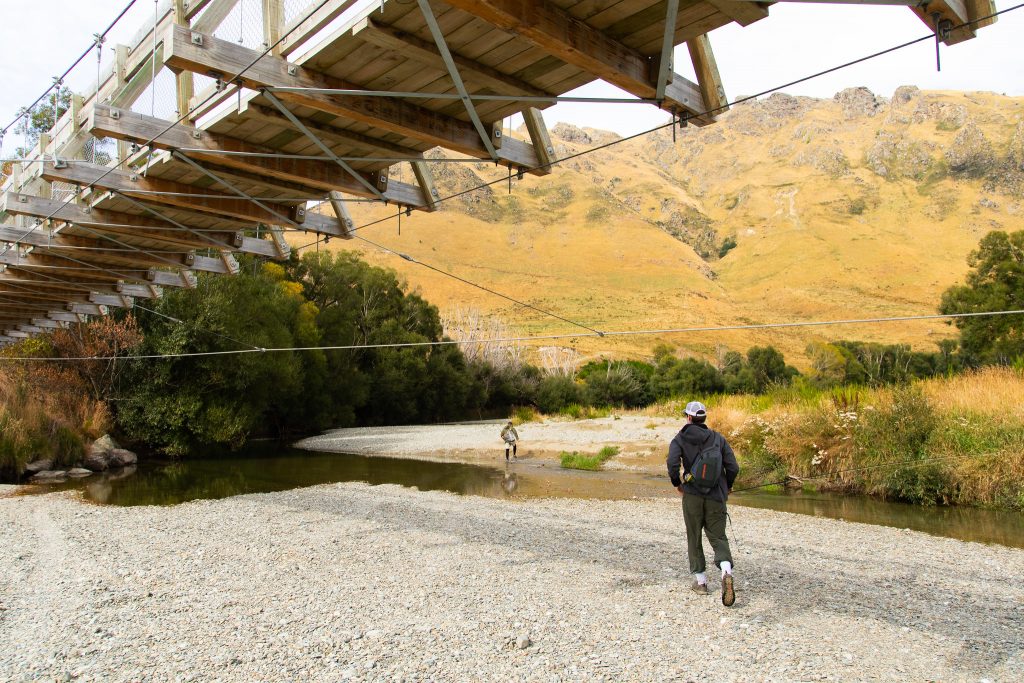 We found water conditions and fish activity reflected the late season time period we chose. Water was generally low (and, in some cases, warm) and fish were spooky, especially in the front country. We saw plenty of fish but they were often difficult to fool and easily spooked by an ill-presented dry fly. After all, NZ is known to have some of the most technical trout fishing in the world…

If you prefer targeting fish in high-water conditions before they’ve seen the offerings of more than a few anglers, perhaps a trip earlier in the season would be worthwhile. If you plan on spending time in the backcountry away from easy-to-access spots, low water conditions can actually work in your favor as we found during our backcountry trips. 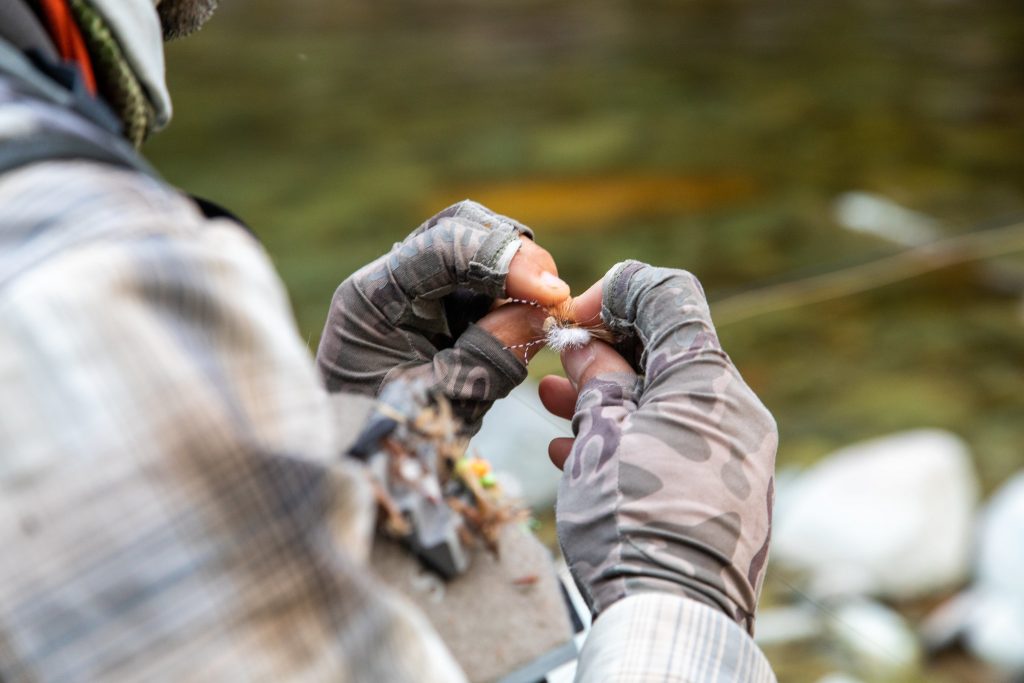 We found these preconceptions to be mostly true. We did catch fish on large dry flies, we did spend most of our time searching for fish, spotting, and sight fishing. That being said, we also caught a handful of fish that we never saw and more than a handful of fish on nymphs.

Bring an equal number of likely dry flies and classic nymph patterns (tungsten always works well to get the nymph down to fish feeding on the bottom). We found small mayfly nymphs worked well during the month of February. The advantage to sight fishing is that you can usually tell if a fish is going to eat a dry fly or a nymph before casting to it. But, don’t get too caught up in seeing every fish… we caught multiple large Brown Trout we never saw by fishing rock lines and undercut banks with a dry/dropper setup. 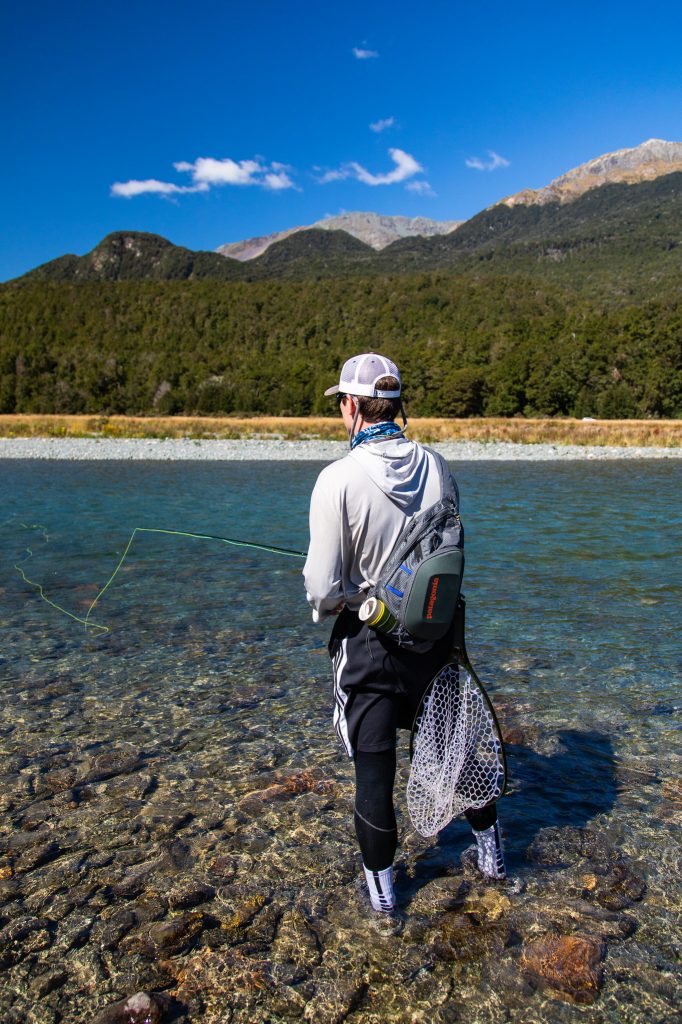 We found a dry/dropper setup to be most productive. I’m sure a Euro-nymphing or sight-nymphing setup would work well, too, especially for fish that are clearly feeding subsurface. I’d advise against any kind of indicator particularly when targeting fish in shallow water, low water conditions, or during the end-of-the-season timeframe. Fish are spooky.

First I’ll insert a quick lesson learned the hard way about flights. I checked a bag and carried on two bags: a rod case and a backpack considered a carry-on and a personal item in the states. I had no problem during flights within the US and to Auckland, however, on the short flight from Auckland to Queenstown, Air New Zealand made me check my second carry-on (they only allow one per person). Some research about airline baggage restrictions would’ve gone a long way on my end. 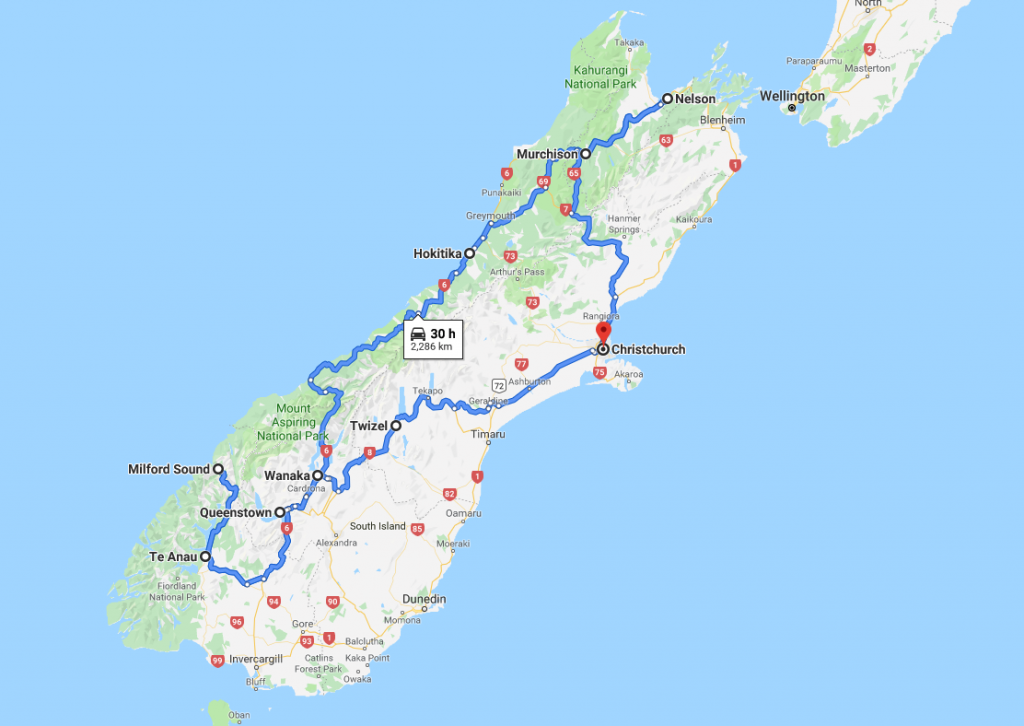 After the near 30-hour one-way trip via plane from northern New England (with layovers etc.), we rented a car and essentially circumnavigated the South Island. A rental car allowed us to fish more than a dozen rivers and see a variety of towns, cities, and country from Milford Sound to the West Coast to the coastal North and everything in between. Unless you’re staying at a lodge, renting a car is really the best way to fish NZ. 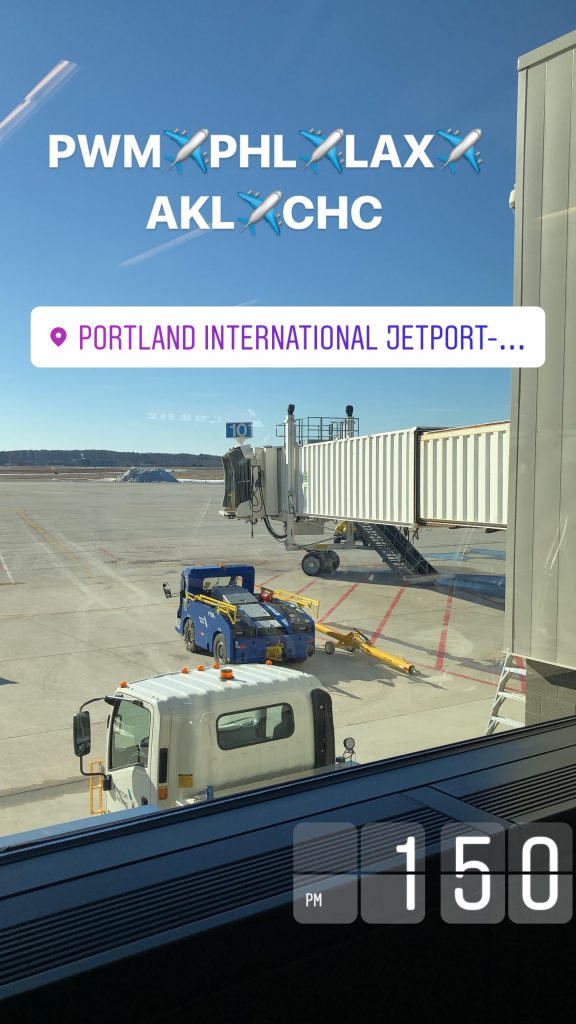 Plan on winding your way through mountain passes, narrow roads, and beautiful countryside. While we spent time in a couple of the country’s large cities (Queenstown and Christchurch), we found our favorite places were smaller towns along the way with great food and hospitable locals.

Which brings up the topic of culture. Our travels brought us to a variety of places and we met some really great people. In general, locals were welcoming, helpful, and accommodating. The food was also pretty stellar (although good things come to those who wait); whether it was Indian food in Christchurch or seafood on the West Coast, we were pleasantly surprised by the cuisine.

A few times we asked locals for information about restaurants, fisheries, and logistics. They were overwhelmingly helpful and friendly, a pleasant surprise that makes any fishing trip better. The quality of culture and experience meant the trip was much more than just a fishing trip. And we weren’t the only people active in the outdoors. From bikers to hikers, many people go to New Zealand to explore in an outdoor-centered way. 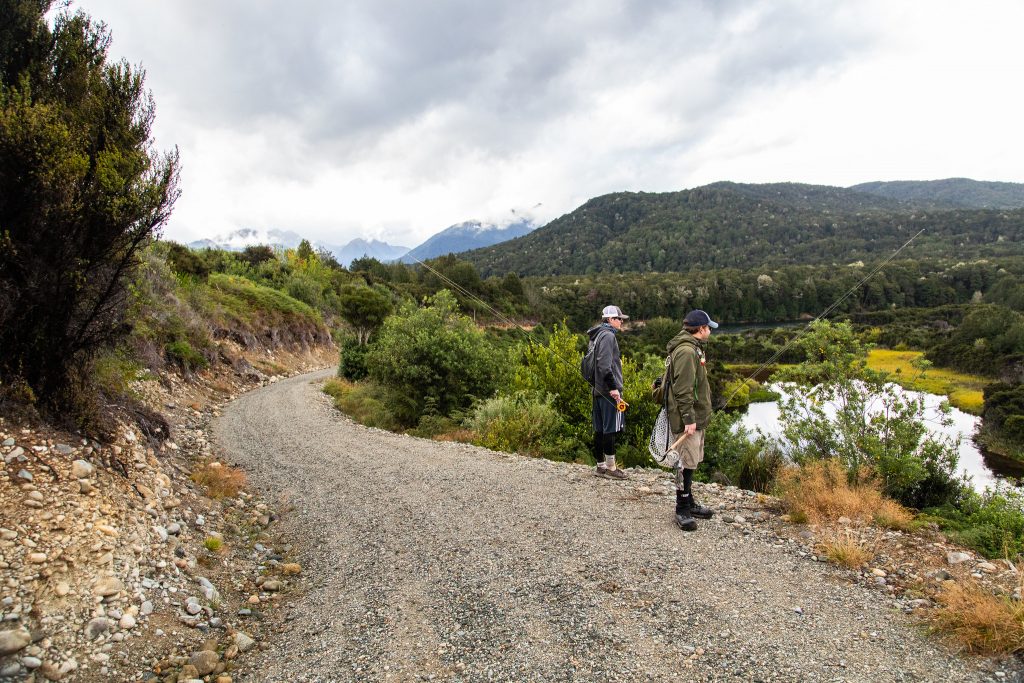 Access, with a little preliminary research, was actually very good, which has its pros and cons. As you can probably imagine, hopping from river to river in the rental car meant we didn’t always have time to get away from the highway. In these situations, access along the roads worked in our favor; it allowed us to fish a ton of different rivers and travel as much as we did.

If you’re all about finding untouched places and fish that haven’t seen anglers, ample access can be an enemy at times. That being said, a good hour hike from any access point usually meant dwindling crowds and fish that weren’t as spooky.

New Zealand is a popular destination fishery. That means anglers from all over the world (yes, even New England) travel to the South Island to fly fish. So public access makes sense. New Zealand wants to encourage as many people as possible to spend time on the rivers. So much so, in fact, that they even make the backcountry accessible in certain ways. 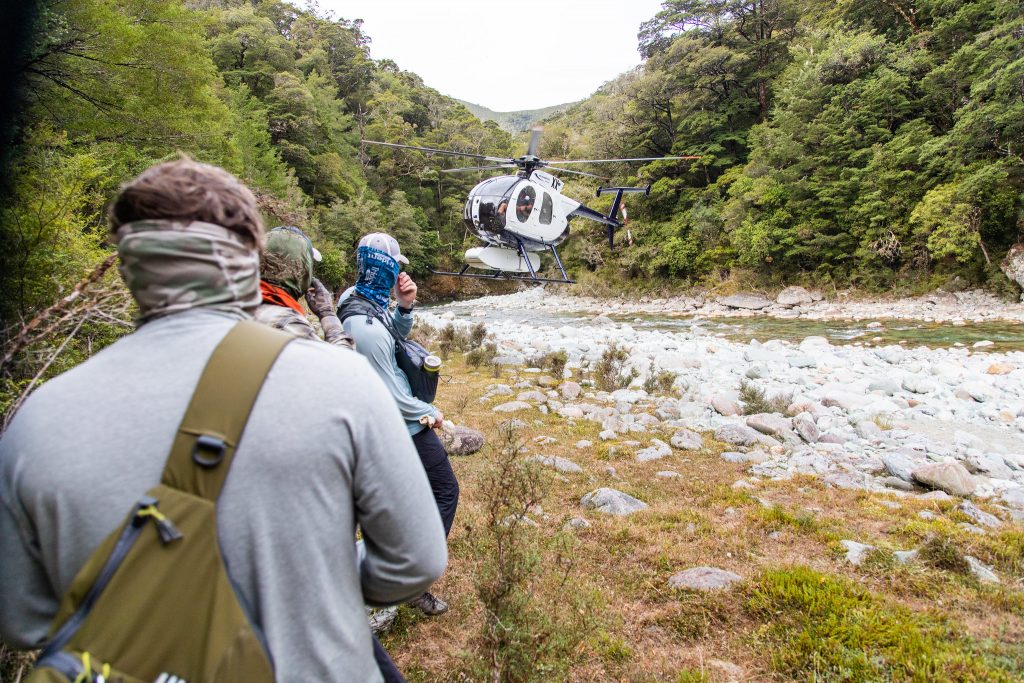 We spent several days in the backcountry, both guided and unguided, by foot and via helicopter. Spending time in the New Zealand backcountry means time in tents and huts, plentiful Sandflies, and lots of hiking. Proper footwear was key and we found that the Ovis Ultralight Wading Boot and Simms Flyweight Boot held up well and made hiking/wading easy.

As funny as it sounds, we also found that backcountry trout (and fish in the front country for that matter) could see us. Clothing with muted colors helped disguise us as we snuck up to present a fly. New Zealand anglers swear by their river camo. We also found loads of Cicadas on the wing during our time in the backcountry which made targeting big Browns a ton of fun.

Backcountry adventures in New Zealand are as much about the scenery and the experience as they are about fishing. The hut system, unique to New Zealand, works on a first-come-first-served basis with hut passes for as little as $5 available at nearly every outdoor retailer. If you have the time and get the chance to venture into New Zealand’s wild places, we’d highly recommend it. Fishing can be better in the backcountry with a guide, however, if you’re familiar with NZ angling, you can often do well on your own, too.

So was the trip worth the travel time, cost, planning, and research? Absolutely. There’s no place like New Zealand, and there truly is something special about hunting big trout. There are few other places in the world that allow sight fishing for massive trout like New Zealand. Add breathtaking views, incredible cuisine, genuine hospitality, and backcountry camping experiences… and it’s safe to say we can’t wait to return. We'd also highly recommend visiting Milford Sound or touring some of the local wineries (Gibbston Valley for example).

Questions about our trip to New Zealand? Give us a call at the shop (888) 413-5211 or email us at support@tridentflyfishing.com. We’d love to chat about anything/everything New Zealand.