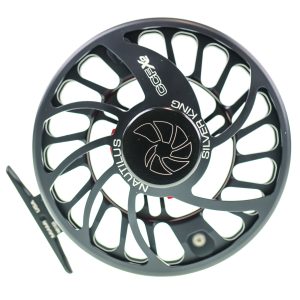 The Silver King is Nautilus' big game version of the CCF-X2, which won our 2018 8wt Shootout, and it’s a reel we still think highly of. At this point, it’s a bonafide classic among saltwater anglers who love its ergonomics, drag adjustability and stopping power. The CCFX-X2 has proven to make quick work of light tackle gamefish like snook, redfish, and bonefish. However, with a name like Silver King, this rendition is designed for an entirely different leviathan. How does it stack up against the competition? Read on to find out!

Nautilus claims the Silver King is the lightest 5-inch diameter big game reel on the market. However, we found their claim of 9.1 ounces inaccurate and weighed it in at over 10 ounces, just slightly heavier than the GTX. It’s by no means heavy, but not a lightweight, either.

Let's start with some good news first. The Silver King’s 17-pound max drag is right up there with the shootout’s leaders. Now for the bad: The Silver King gives us 1.4 pounds of drag at the halfway point, roughly 8% of its max!  So, we know Nautilus builds reels with powerful drags; they just aren’t linear in how the angler can access them.

We don’t generally like one rotation drags for their lack of adjustability. However, with the Silver King, we found the opposite issue. With a test leading seven rotations, Shaun White got jealous. It’s simply WAY too many revolutions to get the drag dialed. Free Spooling might be a possibility, but we didn’t have enough time in the day to loosen the drag all the way to find out.

The Silver King purs like a lion! Put the intended species on the Silver King and listen to it roar. The incoming and outgoing sound phenomenal, like a saltwater reel should, and placed first in this category.

The Silver King shares the same spool with the GTX… it’s a standout feature and a testament to Nautilus’ design team. At 4.64” in diameter and an inch wide, both good enough for second place, the Silver King averages around 12 inches of line pick-up per turn! Unsurprisingly, this is good enough for a second-place tie, and line pilling shouldn’t be an issue, either. The Silver King also holds 338 yards of backing, which should put even the most neurotic of tarpon anglers at ease.

In keeping with the Nautilus tradition of building great-looking reels, the Silver King delivers on this front. It’s a larger version of the CCF-X2, which we rated as having the top ergonomics during our 2018 Eight Weight Shootout; you can read the full review here. The reel is as user-friendly as ever, with the signature large knob and comfortable handle especially beneficial for tarpon. Despite the CCF-X2 being out for quite some time, it still impresses with its good looks and even better ergonomics. What’s not to like?

Lifetime to the original owner + $0 fee. Note that this warranty does not cover damage caused by accident, misuse, improper maintenance, or modification.

The Silver King falls just short of first place, but it’s still a very worthy large-game reel. While looks are subjective, we think it's at least on par with the likes of Hatch and Mako. Most importantly, It’s well-built and will stand up to the harshest elements of salt. The Silver King offers excellent performance across the board, with only the Sage Thermo besting its ergonomics, and audiophiles will be pleased with its best-in-class noise.

However, the Silver King isn’t perfect. Despite a pretty-strong max drag, its non-linear nature puts it at the bottom of the shootout’s barrel regarding total drag accessibility and at the halfway point. Once more, the seven rotations border on absurdity. Despite these hiccups, Nautilus does get a lot right with the Silver King, and it’s a worthy choice to put its namesake gamefish on. Hearing the reel sing as a tarpon rips line will surely bring an ear-to-ear grin.