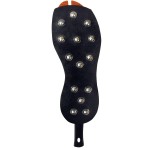 Why would I want to change soles? It's a question that we get all the time when we talk about Korkers boots with our customers. Sure, you get some benefits like having rubber soles to use in your drift boat, but for those of us who aren't floating every other weekend, it seems like it might be kind of a hassle. To be honest, that's how we felt before we got to try them all out. The truth is, the soles allow you to maximize your safety (and therefore your fun) on or off the water.

Here's a quick introduction to the Korkers sole system, and don't forget, if this guide helps you buy your next pair of boots, help us by buying it here.

Korkers says: Sticky rubber with a deep, wide lug pattern for cutting through algae and gripping terrain. Ideal for use on land, in boats, and in less demanding wet wading conditions. Price: $49.99

The Vibram sole is essentially an enhanced rubber sole with loads of extra traction. To compare it to the Kling-on sole would be like comparing your old tires with 50,000 miles on them to a tractor tire… or tennis shoes to golf shoes. So, as you’d expect, they outperformed the standard Kling-On sole in the water, and while we didn’t go on any long hikes through the mud or snow, we’re pretty sure they would beat the Kling-On in those conditions as well.

Ideal use: The Idrogrip is best for hiking in challenging conditions like lots of mud or snow. Do NOT use these soles while wading.

For: The Idrogrip is a better rubber sole than the standard Kling-on. It gripped better in all conditions, including underwater.

Against: For a sole that I wouldn’t use underwater, ever, it seems like a steep price to pay.

A carbide studded version of the Idrogrip sole we talked about above. In water performance is DRAMATICALLY increased with the addition of studs. The Studded Vibram sole worked great in all of the underwater tests we performed. It beat out the studded Kling-On because the location of the studs allowed them to grip better than Kling-On. When you have a round rock, you can just get a few extra studs to touch which will help stop you from slipping. And while we didn’t get to test these soles on super algae covered rocks, these studs should cut through them just fine.

Ideal use: The Studded Idrogrip is a great sole for difficult trails, ice, and underwater use. It might be the best single sole for anyone who isn’t ever going to use a drift boat.

Against: In our underwater test, the Vibram wasn’t that much better than the studded Kling-On that is free with some boots. 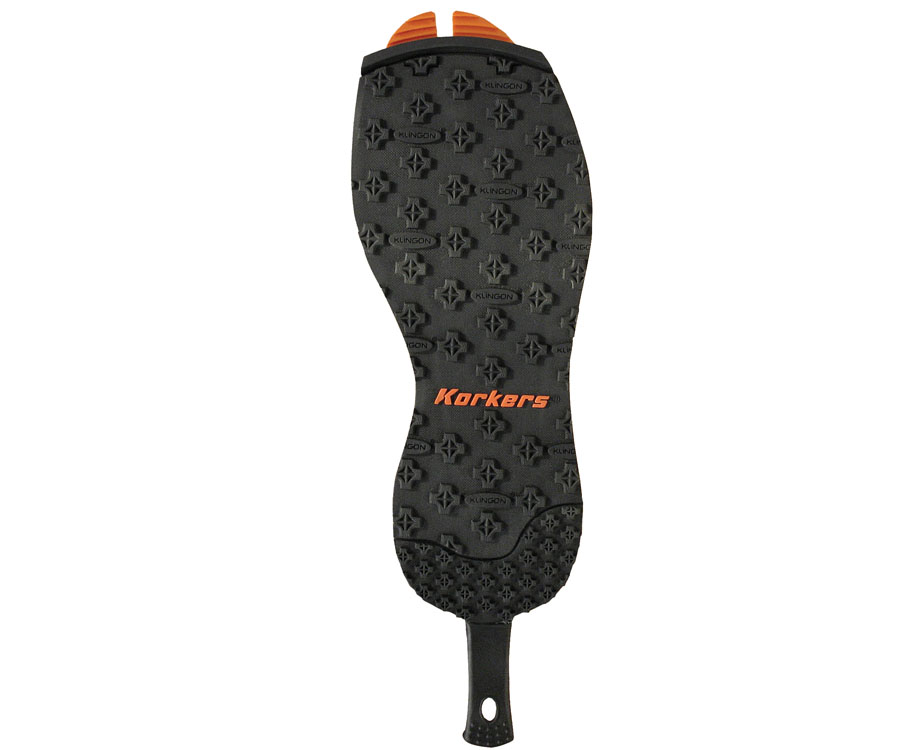 Korkers says: Non-marking sticky rubber with added durability at the heel . Ideal for use on land, in boats, and in less demanding wet wading conditions. Reduces water absorption keeping them lightweight and reducing the spread of invasive species. Price: $29.99, but free with most boots.

The Kling-On sole is a basic rubber sole. You can do anything with them that you can do in your sneakers. What does that mean? They are awesome for wearing in your drift boat and for light hiking but absolutely horrible in the water. In our side-by-side testing, the Kling-On soles slipped more than any other sole. But hey, if you want to go for a swim, they’ll get the job done! Since the Kling-On’s come with most of Korkers boots, they are a great option for a 2nd or 3rd sole since the price is right. If you’re buying them, the Vibram sole is more useful overall.

Ideal use: Drift boats and light hikes. Do NOT use these soles while wading.

For: An inexpensive sole that gets the job done topside.

Against: There’s a better sole for most situations. 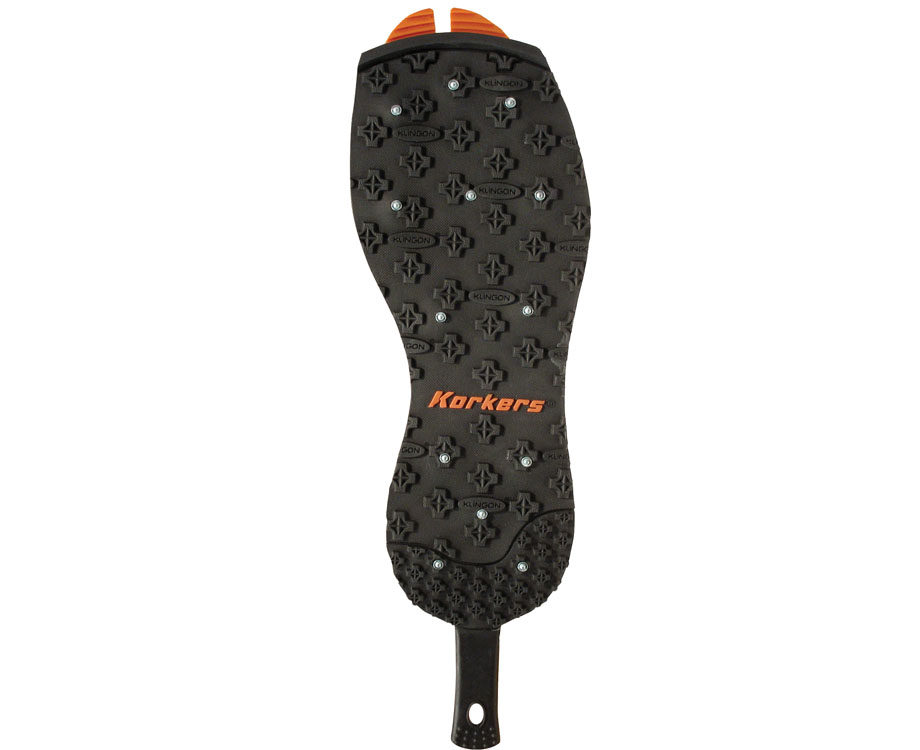 Korkers says: Same sole as King-On with 26 carbide-tipped studs per pair. Ideal for extremely slippery aquatic environments. Reduces water absorption keeping them lightweight and reducing the spread of invasive species. Price: $39.99, but free with some boots.

The Kling-On Studded sole is a souped up version of the standard Kling-On. Once again, studs take a standard sole that isn’t great in the water and make it totally useable. When I compared it to felt head-to-head, the Kling-On Studded, didn't perform quite as well, but will likely provide much better grip in algae rich environments. Overall, it's a solid sole that performs well in the river.

Ideal use: A great all-around wading sole, but don't expect to use these in your drift boat.

For: A great, inexpensive, underwater sole

Against: I preferred the Felt, Vibram and the Studded Rubber soles for underwater use.

Felt certainly needs no introduction. It’s been the standard for wading boots for years. Why? Because it works really well. So well, that we used it as our standard for comparison in the test. Felt worked better than the studded Vibram or Kling-On soles in the water, but keep in mind that in situations with lots of algae, it probably won’t work as well as studded options. Out of the water, felt also works pretty well (and won’t destroy your drift boat), but don’t expect the tractor like performance of heavy tread like Vibram.

Ideal use: This old standby is a great all around option for use in single watersheds where there is no risk of spreading invasive species.

Against: Felt has been outlawed in some states and it is not an environmentally friendly option. 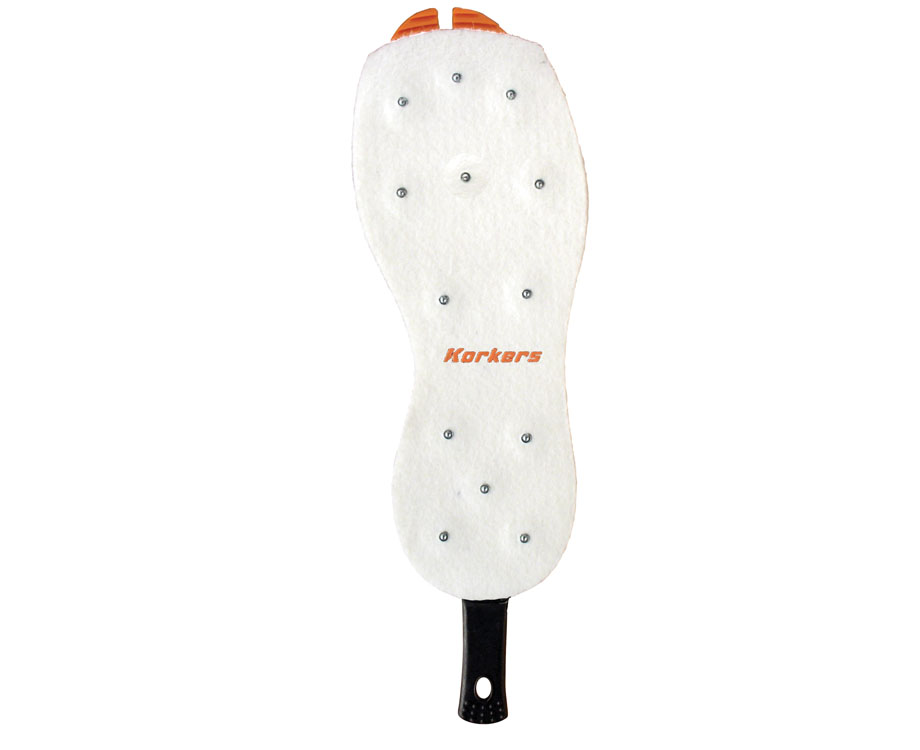 Korkers says: Same sole as Felt, only with 26 carbide-tipped studs per pair. Ideal for extremely slippery wading environments where felt can be utilized. Price: $39.99

Studded felt is the same as felt, but with a bunch of carbide studs. When I say it’s the same, I also mean that the performance was pretty much the same when we tested it side-by-side. Sure, the studs made a tiny bit of difference, but not much. So, as I mentioned earlier, we didn’t get to test it in an algae rich stream, but I’m willing to bet that the studs make at least some difference. That is to say, studded felt is (probably) better underwater than standard felt.

Ideal use: The same as felt, plus increased underwater performance, minus ability to use them in a drift boat.

For: Probably better than standard felt across all underwater conditions.

Against: Felt has been outlawed in some states and it is not an environmentally friendly option. 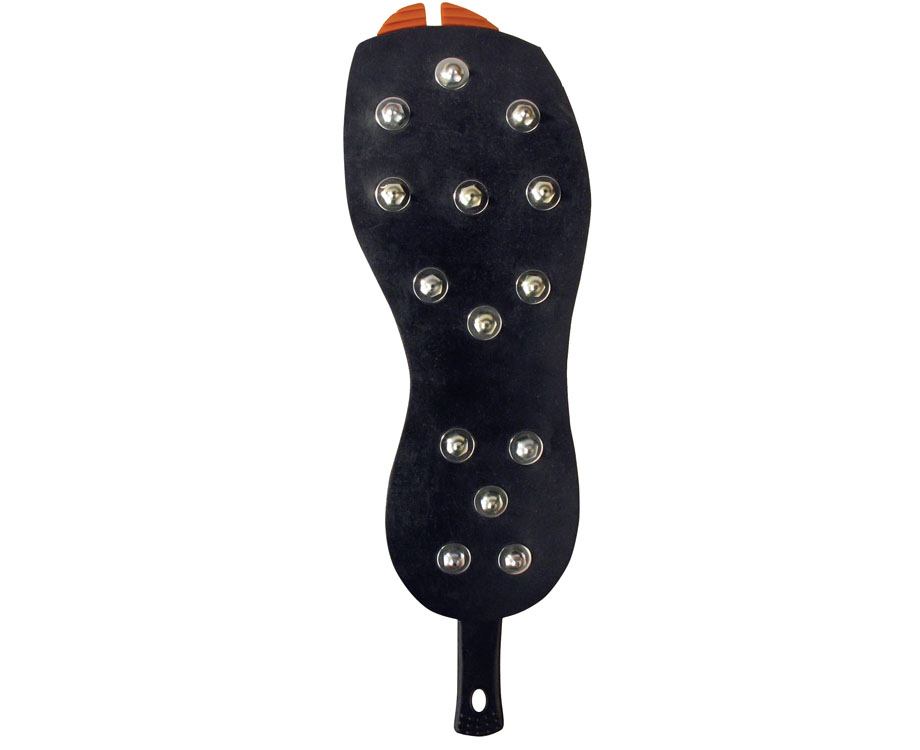 Studded Rubber was my absolute favorite sole underwater. I can’t really explain why this is the case, but they are just awesome. You stick to every rock like glue. So, what's the downside? Walk around on concrete and you'll see. These soles feel like golf spikes from the 1980's. They aren't great for hikes. They'll totally destroy your drift boat. But studded rubber will keep you high and dry in any river conditions.

Another nice thing is that the studs are replaceable, so you won’t have to go out and buy a new sole when they wear out.

Ideal use: Studded rubber out-performed all other soles underwater and is great for anyone looking for extra grip or wading in the most demanding conditions.

For: The best underwater sole, period.

Against: No place for them on concrete, drift boats, and they aren't the best hiking sole. 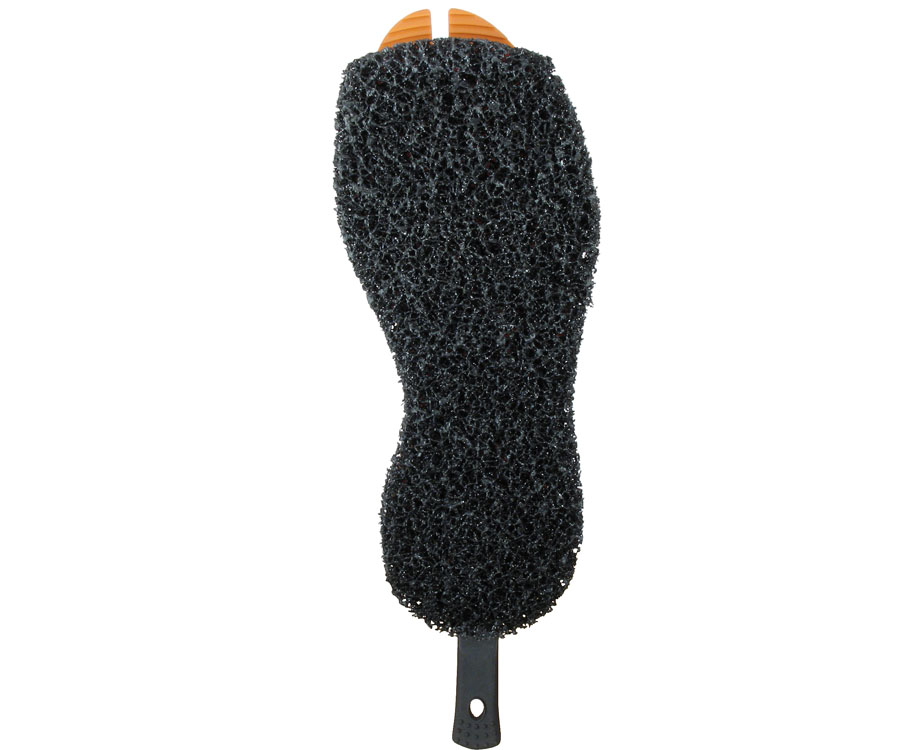 Korkers says: In conjunction with Korkers OmniTrax Interchangeable sole system, the innovative Svelte outsole technology is designed to provide maximum traction in water with minimal impact to the environment. [Svelte has] superior grip to felt & rubber, 5X less water absorption and dries 4X faster than felt. Soles intended for use in water only. Use on terrain such as trails, roads or pavement may cause premature wear and shorten the life of the product. Price: $64.99

Svelte is just like felt, but in an environmentally friendly package. When someone makes a claim that the performance is “just like” something else, I’m skeptical. How can this weird mesh be just like felt? But it is, in fact nearly identical. In our test conditions , I couldn’t tell the difference. It’s an amazing all-around sole. The only downside is that Korkers has told us that these soles aren’t all that durable. In fact they told us that again when we shared this review. Don't expect them to last.

Ideal use: Svelte was one of our favorite soles. It has all of the pros of felt without the environmental impact.

Against: Expensive and Korkers has told us it doesn’t last that long. Like really fast. 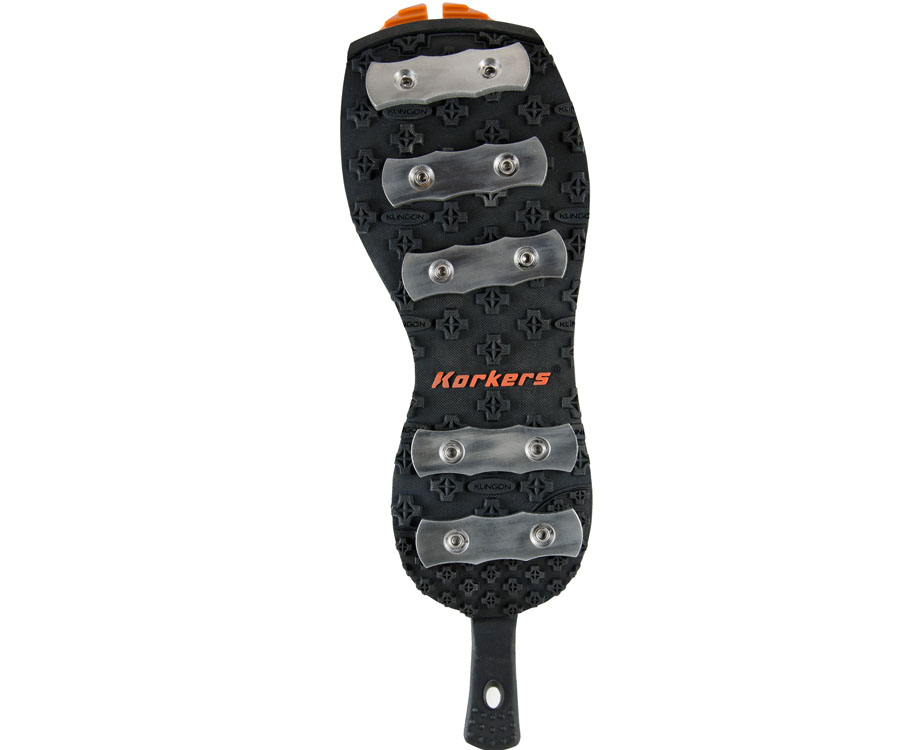 As a fan of both Patagonia Foot Tractors and Simms Aluminum studs, I had really high hopes for the Alumatrax. Actually, I pretty much assumed that they would be the winner right off the bat. As it turns out, they aren’t all that great. In fact, they were only slightly better than rubber soles. They are slippery underwater, tough to walk on above ground, will scratch up your drift boat, and they are expensive. It makes me want to get out and try my Patagonia’s next to studded rubber to see how they do.

Ideal use: Aluminum bars have a lot of fans, but without further testing, we can’t recommend them.

For: Telling your friends that you paid less than they did for their Patagonia’s.

Against: There's a better sole for every situation.

So, which one should I buy?

It’s a tough question. Obviously you should examine the way you fish and the waters you fish and make the decision for yourself. However, if you want to have ONE sole that will do (almost) everything, I’d recommend Svelte. You can use it in virtually any condition with confidence, but don't expect it to last forever. Or more than a few trips. If you're never going to be in a drift boat, studded Vibram is the next best choice for an all-around sole.

If you’re going for TWO soles (and isn't that the point of being able to change anyway???), I’d recommend an all-around sole that’s drift boat safe, like Svelte and a high-performance underwater sole, like Studded Rubber. Really, you want to have Studded Rubber. It's awesome.