How to Tie Tim Borski's Slider 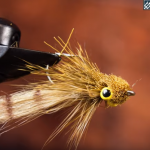 How to Tie Tim Borski's Slider

Learn how to tie the Borski Slider including step-by-step instructions, a video tutorial, pictures, and much more. Improve your fly tying skills here.

The Borski Slider was originally invented for Bonefish but has quickly morphed into a fly that's well-known for its ability to fool picky redfish. This baitfish imitation works well in shallow water marshes and sandy flats when targeting fish with a large appetite. The fly is relatively easy to tie, especially the back half, but does involve spinning some Deer Hair. The Deer Hair acts as a natural weed guard on the hook and makes it an even better pattern for areas with grassy bottoms. If you're headed to the southeastern US this winter to chase Redfish (like we are), don't go without a few of these flies.

Start your thread and attach your Dumbbell Eyes. Create a thread bump about 1/3 of the way back on the hook shank and tie your eyes in using a series of figure-8 wraps. Secure your Dumbbell Eyes with Superglue to add durability to the fly.

Select a chunk of Tan Craft Fur, strip out the short fuzzy fibers, and tie it on top of the hook shank. Measure the Craft Fur so it extends roughly two hook lengths beyond the bend of the hook. Tie it in right behind the eyes and wrap the thread all the way back to secure the Craft Fur.

Grab a Hackle Feather that matches the general color scheme of the fly, tie it in, and wrap it forward. Tie it in right in front of the Craft Fur and wrap the stem up right behind the eyes with your thread. Then wrap the Hackle forward using nice, evenly spaced, open turns. Tie it off right behind the eyes and cut off the excess Hackle.

Tie in the Deer Hair collar. Cut a chunk of Deer Hair that's a little larger than the diameter of a pencil and strip out the errant fibers. Lightly stack the Deer Hair then measure the hair so it extends past the hook point and almost to the bend of the hook. Tie it in by catching the hair with two loose wraps then pulling down to flare the Deer Hair. Advance your thread through the Deer Hair in front of the eyes.

Start trimming the head of the fly by making a cut just off the hook eye and right on top of the Dumbbell Eyes. Be careful not to cut the collar of the fly.

Invert the hook and make the same cut on the other side of the fly. Continue to trim the head of the fly so you create a rounded head without trimming the collar. Leaving the collar intact will help the fly push more water and have a larger profile.

After the initial cuts are made using a razor blade, continue trimming the fly with scissors. Take out the hard edges of the fly and make sure it's well-rounded and trimmed nicely. Add Superglue to the thread wraps to reinforce the fly.

Finally, use a marker to add colored lines to the body of the fly. And that's the Borski Slider. This is a phenomenal pattern for Redfish and really any predatory fish. This is a pattern worth bringing with you on a Redfish-specific trip or even a flats trip.