How to Tie the Soft Hackle Streamer Fly 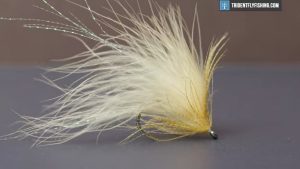 How to Tie the Soft Hackle Streamer Fly

Learn how to tie the Soft Hackle Streamer pattern including step-by-step instructions, a video tutorial, pictures, and much more. Improve your fly tying skills here.

Begin the pattern by running the thread around the upper third of the hook's shank. It is essential to leave a small space between the thread's stopping point and the hook's eye.

Marabou feathers are the Soft Hackle Streamer's primary ingredient.  Before tying on, strip most of the fiber from the feather's tip. Tie the feathers on at the shank's seat, near the Krystal flash's end section. Grab the front of the feather and gently palm it around the shank until it flows neatly, then tie the tip in.

Creating the pattern's collar with mallard flank feathers is the final step in the tying process. Be sure to choose a feather that is half the size of the marabou. Tie it on at the tip, at a 45-degree angle. Next, wrap the feather around the shank then back to the eye. After securing a whip-finish, the Soft Hackle Streamer is ready to hit the water!