How to Tie the Quill Gordon Fly 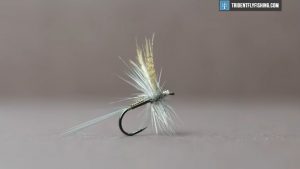 How to Tie the Quill Gordon Fly

Learn how to tie the Quill Gordon fly pattern, including step-by-step instructions, a video tutorial, pictures, and much more. Improve your fly tying skills here.

Quill Gordons are one of the first significant mayfly hatches on the east coast each year. They offer excellent early-season dry fly opportunities due to their relatively large size and prominence on the water. Theodore Gordon's Quill Gordon Dry Fly has been catching fish for over a century, and we're going to show you how to tie this classic Catskill-style dry.

For the first step, create the pattern's body profile by wrapping the Uni-Thread around the hook's center. Tie the thread back up roughly three-fourths of the hook's shank.

Next, make the Quill Gordon's wings by clipping the tip of the Mallards Flank Feathers off, then strip the fuzz off the feather. Make sure the wings are one and a half times the size of the hook's base, then tie them on. After clipping the fibers facing the hook's bend off, wrap the thread around the front of the remaining fibers. Tie a figure 8 around the center of the wings to secure them.

Moving onto the tail, take a few of the Mayfly Tail's fibers and tie them on one side of the hook for the tail profile. Secure the threads by making several wraps, then clip the material facing the hook's eye off. Repeat the process for the second tail by connecting them to the opposite side with multiple wraps. When tying, make sure to reposition the tail, so it is evenly spaced apart.

The body of the Quill Gordon consists of Peacock Herl. Strip the fibers off the herl by moving your thumb and index finger gently down the length of the herl several times. Place the tip right below the wing section and wrap it to the tail nice and tight. Take the herl's end section, wrap it until you get right below the wing, and tie it off.

For the final step, tie the dry fly hackle below the wings and secure the thread right behind the eye. Pull the fibers parallel to the shank, then wrap them several times behind the wings. Repeat this process in front of the wings, then tie the feathers behind the eye with a half-hitch. Complete the pattern by securing another half-hitch below the eye.