How to Tie the Parachute Adams Fly 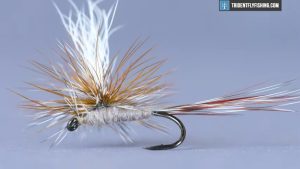 How to Tie the Parachute Adams Fly

Learn how to tie the Parachute Adams Fly, including step-by-step instructions, a video tutorial, pictures, and much more. Improve your fly tying skills here.

Floating in the film with a buggy profile from below, the Parachute Adams is a must-have. A spin on Leonard Halladay’s classic Adams Dry Fly, the Parachute Adams is a super effective parachute pattern whether you’re fishing a tiny blue line or a large river. An excellent choice for searching water or when looking to match a grey mayfly like the slate drake, the Adams Parachute is as versatile as they come.

Begin the pattern by running the thread along the base.

After the thread base is established, we will dive straight into the tail section. The Parachute Adams' tail consists of grizzly and brown hackle fibers. Be sure to work the two feathers between your fingers, so they blend in nicely. Next, tie them near the shank's bend and run the thread up 70-percent of the shank's length.

The Parachute Adams wing consists of white calf tail fiber. Place a small portion of the material in the hair stacker, then clip the tip ends. Tie the calf tail where you previously left off. Make a few wraps right below the wing, followed by several in front of it. Before moving on to the next section, clip off the rearward-facing material.

Once the wing points upward, make several X wraps around the material and the shank, slowly working the thread up the wing. It helps to hold the tip of the fibers by the fingers of your non-dominant hand while wrapping with your dominant hand. Be sure the thread covers 20 percent of the wing.

Apply a pinch of the Superfine Dry Fly Dubbing to the thread. Remember, start by working with a small amount at first. You can always apply more if needed. Wind the thread from the shank's rear to below the wing. When the thread hits near the wing, make several thick wraps to help give the mayfly a more pronounced thorax.

Place the brown and grizzly saddle together with the stems facing upward. Tie the saddle on top of the shank, right in front of the wing. Clip the outward-facing material.

Apply another small pinch of dubbing and make a few wraps at the thorax.

Going back to the hackle, make several overlapping wraps around the wing. Next, gently pull the wing rearward, then secure a half-hitch in front of it.

Finish the pattern by clipping off the excess feather then hitting a whip finish. The Parachute Adams is ready to hit the water!