How to Tie the Klinkhammer Fly Pattern 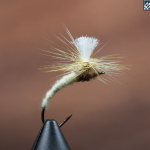 How to Tie the Klinkhammer Fly Pattern

Learn how to tie Klinkhammer Fly pattern including step-by-step instructions, a video tutorial, pictures, and much more. Improve your fly tying skills here.

The Klinkhammer, developed by Hans van Klinken, is an emerger pattern that works well for trout feeding on the surface or just below the surface. The Klinkhammer can imitate an emerging Caddis or an emerging Mayfly and works well as either a searching pattern, attractor pattern, or a technical dry fly. Jared shows you the steps needed to tie this famous fly in detail with thorough instructions so you can tie one up on your vise at home.

Start your thread and wrap it past the bend of the hook. Use the cream dubbing to dub the body of the fly. Create a slight taper as you approach the flat part of the hook.

Tie in the poly yarn as a parachute post. Tie the yarn onto the hook then double it over and start wrapping the thread up to create the upward-facing parachute.

Create a nice thread base on the parachute by wrapping your thread upward. This will give you a good base for wrapping the dry fly hackle in later.

Tie in the Whiting dry fly hackle and snip off the excess stem of the hackle. Pull the hackle upward on the backside of the parachute post and anchor it down using upward wraps.

Similar to step three, wrap the hackle into the thread base you've create on the parachute. Bringing the hackle up the post will allow you to wrap it down later.

Grab some brown dubbing and dub the thorax of the fly. Be sure to continue to build the taper of the fly and finish with the thread on the side of the hook closest to you. This will help when tying in the hackle.

Coat your thread in superglue and wrap it around the parachute. After the thread is anchored, snip it off instead of whip finishing. The superglue should hold the thread in place. Trim the parachute then you're done! This is a great pattern when emerging insects are present and can be tied in a variety of colors to imitate different bugs.