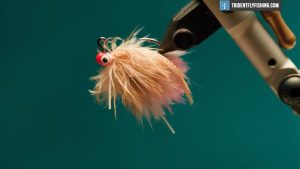 Trident Fly Fishing is a full-service fly shop. We spend a lot of time testing gear and writing reviews to give you all of the tools to make your next trip a success. We are not a blog or a review site. 100% of our funding comes from your gear purchases, so if this blog post helps you on your next fly fishing adventure, please support us by buying your gear from us

Designed by Bob Popovics, the Sand Flea has natural motion, a realistic profile, and is incredibly effective anywhere you find sand fleas. Whether you are chasing striped bass in the Atlantic surf, corbina in the Pacific, or pompano in Florida’s wash, this fly does an excellent job at matching these crustaceans.

Begin the pattern by running the Uni-Mono from the bend below the hook’s eye to just above the rear curve.

We’re using saddle hackle in three different colors for the Sand Flea’s body. Strip the fibers from the three feather’s tip sections, then stack them on top of each other.

Next, tie the feathers by the tip with the flowy section pointing toward you, then clip the forward-facing excess material.

After securing the hackles, palmer the feathers forward with overlapping turns, then secure them three-fourths up the shank. Be sure to clip the excess material, then cover the rough patches with thread.

We are now moving onto the Sand Flea’s legs. Tie on the silicone leg on the shank’s side nearest you, with the rearward-facing piece extending past the feathers.

Finish the legs by folding the forward-facing silicone material over to the shank’s opposite sides and tighten it with figure-eight wraps. Be sure to trim the legs, so both are the same length before moving on.

Like the first saddle hackle grouping, remove the fibers from the tip ends of two feathers, stack them on one another, and then secure them on the shank’s side nearest you.

After trimming the feather’s stems, turn the fibers three times around the shank, then clip the extra material.

We’re now tying on the Sand Flea’s next round of legs, and it’s the same process as the first set. Secure the legs in front of the hackle we tied on the previous step. Fold the silicone material on the shank’s opposite side and secure it with figure-eight wraps.

The pattern’s mole crab shape should be more prominent after tying on the final set of three feathers by the tip and above the previously tied legs.

Before wrapping the feathers up the shank, secure the dumbbell eyes by making figure-eight wraps on the shank’s bottom and in front of the feathers.

Wrap the final grouping of feathers forward and break the excess fibers at the eye.

Secure the last set of legs in from of the previously tied feathers.

The final material is a mallard flank feather. Tie the feather on by the tip at the eye. The flowy section should be positioned right past the hook’s bend.

Complete a whip finish, and the Sand Flea is ready to hit the water.