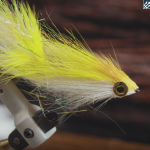 Tips for tying the Ragdolly Streamer Fly Pattern including a materials list, instructional video, and much more. Improve your fly tying skills here.

If you're a streamer junkie, this fly is for you. The Ragdolly is an articulated streamer that's designed for big fish. Sure, it takes some time to tie, but it's a really effective pattern for meat-eating fish. Follow along as Jared provides step-by-step instructions to tie this complicated fly with a fishy profile.

Start by laying down a small thread base on the hook. Tie in two Saddle Hackles for the tail. Splay the hackles so they're facing away from each other. Measure them so they're roughly a shank and a half in length. Tie them down and clip the excess.

Tie in the Marabou. Measure the Marabou so it extends just shy of the halfway point on the Saddle Hackle. Twist the excess Marabou to make it easier to trim and cut it at the hook shank.

Reverse tie in the Tan Craft Fur. Grab a chunk of Craft Fur that's about half the diameter of a pencil and measure it so it extends almost to the tips of the Saddle Hackle. Tie in the Craft Fur so the butts are facing backward on the hook shank.

Tie in 4-5 strands of Flashabou. Double the strands over the thread and tie them in right on top of the hook shank behind the Craft Fur. Trim the Flashabou so it's just even with the tail of the fly.

Tie in the Polar Chenille right in front of the Craft Fur and wrap it forward. Advance your thread and wrap the Chenille forward with open-spiraled wraps making sure the Chenille angles backward. Tie off the Chenille and trim the excess.

Grab your second hook and attach the articulation wire. After laying down a thread base, tie in the wire on the top side of the hook shank. Start by wrapping the thread forward then fold over the wire and wrap backward. Trim the butt end of the wire.

Grab the hook that you've been tying on and thread the articulation wire through the hook eye. Before doing this, add two Spirit River Fusion beads to the wire. After adding the beads, wrap the wire back onto the second hook starting forward then folding it over and wrapping backward. Leave a little room in the wire so the fly doesn't foul and maintains movement in the water.

Repeat steps 2-7. Again, start by tying in more Marabou. Then tie in both Tan and White Craft Fur on both sides of the hook shank. Add Flashabou and pull the Craft Fur back. Palmer the Polar Chenille forward to create a body.

Tie in Deer Hair then repeat steps 2-6. The Yellow Deer Hair should be almost the diameter of a pencil and extend past the flash and almost to the start of the back hook. After tying in the Deer Hair on the top of the hook shank, repeat steps 2-6 starting with the Marabou. After completing these steps, whip finish and switch threads to the GSP.

Repeat steps 13 and 14 with more Deer Hair in front of the collar. Tie in Yellow Deer Hair on top and White on the bottom with two loose wraps and a tight wrap to flare the Deer Hair. After adding the second round of Deer Hair, throw a whip finish.

Finer head trimming can be done with the fly in your hands or with a pair of scissors. Leave some longer Deer Hair attached as a collar for the fly and trim the front to the desired shape.

Add Flymen Fish-Skull Living Eyes and the fly is finished! The Ragdolly is a great late season pattern for hungry post-spawn browns or an early-season pattern to fish during Spring runoff. This streamer has a ton of movement in the water and can be used for Bass, Trout, Pike, Musky, and just about any predatory fish.