How to Tie a Rhody Flatwing Streamer Fly 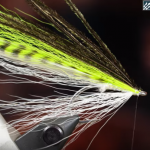 How to Tie a Rhody Flatwing Streamer Fly

Learn how to tie the Rhody Flatwing including step-by-step instructions, a video tutorial, pictures, and much more. Improve your fly tying skills here.


The Rhody Flatwing is a stellar saltwater pattern that can be tweaked to imitate a variety of saltwater baitfish. This pattern is perfect for Stripers, flats fish, and can even be used in freshwater for Bass. Simple streamer patterns are a staple in saltwater fishing and this fly should be in every avid angler's fly box. Tune in as Jared shows the necessary steps to tie this famous pattern.

Choose a sparse selection of White Bucktail and tie it in as a support for the wing. Measure the bucktail to be 1.5-2 times the length of the shank of the hook. Tie in the bucktail at the bend of the hook.

Choose a hackle to tie in as the wing of the fly. Strip the fuzzies off of the hackle and use them to build a dubbing pillow to help tie the hackle in flat.

After building the dubbing pillow with the fuzzies from the hackle, tie the hackle flat on the top side of the hook. Catch the hackle with one light pinch wrap then reposition the feather before fully tying it in.

Double one piece of Flashabou over the thread and tie it in right on top of the hackle.

Take two more pieces of Flashabou, double them over the thread, and wrap them forward to create a body. Make nice, even turns to build a uniform body and tie off the Flashabou just behind the eye of the hook. After you're done wrapping, catch the Flashabou with your thread and cut off the excess Flashabou.

Invert the hook and tie in White Bucktail as the underwing of the fly. Measure the underwing so it extends halfway up the hackle and tie it in just behind the eye of the hook on the underside of the shank.

Finally, choose 5-6 strands of Peacock Herl and tie them in on top of the hook shank. After tying them in, cut the loose ends. Throw a whip finish and add some superglue for increased durability and you're done!