How to Choose the Best Fly Reel for Musky 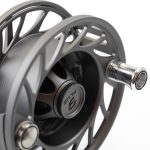 How to Choose the Best Fly Reel for Musky

Musky are mean. They're large, finicky fish that will eat anything one day and refuse the most well-presented fly the next. These fish have gained popularity in contemporary fly fishing in part due to the big-bug craze and in part due to social media. Who doesn't want a picture with a 40+ inch predatory giant?

Most anglers prefer to target Musky from a boat. A boat allows anglers to cover more water, see more fish, and pull fish away from cover more easily. Every advantage an angler can gain when fly fishing for Musky is an advantage worth having. Because these fish are so difficult to catch on the fly, having the right gear is one advantage you don't want to overlook. If you're curious about choosing a fly rod for Musky, we've covered that here.

But what about choosing the right fly reel for Musky? Like choosing a reel for other species, there are a lot of options. This article will help you sort through the choices to help determine exactly what you need in a Musky fly reel and which features may be extraneous.

You may have heard of reels with a 'big game handle'. If there's ever a time to choose a reel with a big game handle, it's when you're fishing for Musky. But what qualifies as a 'big game handle' and what benefits does it provide to the angler? One of the best examples of a big game handle can be found on the Redington Grande. The handle on the Grande is large, easy to grasp, and rectangular with two curved sides (not quite round, not quite oval-shaped).

The shape, size, and ergonomically-friendly build of a big game handle allows the angler to reel in line quicker while putting more pressure on a fish. When fighting a Musky, the last thing you want is a reel handle that slips out of your hand when wet. A reel with a big game handle will go a long way in helping you fight and land more fish.

Other reels with a genuine big game handle include the Seigler MF, Galvan Grip, Hardy Fortuna XDS, and various Nautilus Reels. These reels are made for fighting larger species, like Musky, and also feature rugged reel design and capable drag systems. If you're going to buy a fly reel for Musky, these reels are a great place to start.

I'm going to let you in on a secret here. Drag doesn't matter. Many anglers think larger fish necessitate reels with a stronger drag. In some cases that may be true, but Musky are heavy, slow, and lazy. Because they're ambush feeders, Musky don't tear off a bunch of line and take an angler into his/her backing (not very often, anyway, I won't say it doesn't happen). Choosing a fly reel with a ton of drag and/or backing capacity shouldn't be a priority.

So if drag doesn't help land a big Musky then what does? A rod with a strong butt section for increased lifting power and the ability to direct the fish away from cover is a good start. A strong, durable hook is also important. Strong wire leaders are also in the conversation. But a reel with 20lbs of max drag just isn't worth the investment when fishing for Musky.

Anglers also generally target Musky from a boat. If a fish happens to start tearing fly line off your reel and speeding down the lake, you can chase after it. That's not to say Musky can't be caught from the shore but if you're planning on fishing from a boat, choose a reel that will hold up to dings, scrapes, and drops over a reel with the drag strength to stop a truck (or a Tarpon).

Reels can get beat up whenever you're fishing from a boat. Choppy water, lost balance, big fish, and other variables often lead to dropped fly reels. Add loading and unloading, transportation, and storage during the off-season and it's easy to see why a durable reel is important. The importance of durability has more to do with days on the water than it has to do with species, sure, but if you know anything about Musky you know the two go hand-in-hand.

Musky are, by nature, really difficult to catch. They're nicknamed the fish of 10,000 casts for a reason. If you're looking for a rod/reel setup for Musky, chances are you're fishing more than three or four times per year. And even if you do fish more than a handful of times, you're not guaranteed to catch a Musky. Long days on the boat and many casts are inevitable, so choose a reel that'll last. Fly reels with a die-cast design probably aren't the best choice. If a reel bends or warps from being dropped or dinged, it's not a good Musky reel.

Many reels are more than durable enough to withstand the grind of Musky season. Reels like the Hatch Finatic, the Ross Evolution R Salt, and others are machined from aircraft-grade aluminum and finished with Type II anodizing which is durable and stands up well to dings and scrapes. Choose a reel with a durable design, trust me you'll be glad you did.

Ok, I know what I'm looking for. Now, which reel should I choose?

If I were to choose a reel for Musky it'd be the Hatch Gen 2 Finatic, but I'm biased. Other great Musky reels include the Orvis Mirage, Taylor Revolution Z, and the Bauer RX.