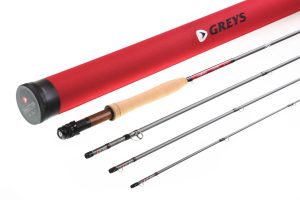 The Wing is Greys’ premium, fast-action offering designed to offer anglers the performance of a high-end model at a fraction of the cost. The Wing’s predecessor, the GR80, received praise from nearly everyone who cast it, which, unfortunately, wasn’t many. Will the Wing take off and help re-establish the Greys' name to American anglers? Read on to get our take!

The Wing features a solid group of components for its price. The double uplocking reel seat features a-symmetrical hardware that makes reel slippage a thing of the past. The cork is hardly premium, but it suffices and seems to be on average with similar rods. The Wing features a red label section above the cork, which will annoy some. But at least the remaining blank is a subdued matte gray finish.

Sick of trying to align alignment dots? Greys include lines on the dots that run into the next section, leading to quicker and more accurate setup times. Hard chrome stripping and black snake guides do their job and allow the line to pass through. Another smart design feature is the last stripping guide is noticeably slimmer, which leads to better accuracy. Not the most visually-pleasing rod we’ve seen, but you’re not buying a Greys rod for its aesthetical qualities, either.

The Wing is a rod that’s best for the above-average caster looking for a rod to tackle technical conditions. We found it relatively fast, despite not being a complete plank. Even with a slightly softer tip, the Wing will keep you honest with its tight timing window. However, for the experienced caster in tune with their sensitive side, the upside is there: Tight loops, power, accuracy, and wind-piercing performance.

We cast the Wing with a Scientific Angler Amplitude MPX which worked decently. The heavy head helped with short-distance casts. However, a lighter line like the RIO Gold will be better for the advanced caster looking to make really long casts.

The Wing took a little longer to figure out than many rods we’ve had the opportunity to cast lately. We can safely say this isn’t the rod for the beginning angler, and most will be much happier with the Lance. The Wing is a touch temperamental, twitchy, and moody but provides excellent all-around performance at a very reasonable $399.99. The Wing is a great choice to tackle technical trout fisheries if you have the skills but are missing the funds for higher-end options. Only time will determine whether there is a large enough market for a rod geared for the expert but priced closer for the beginner.