Georgia Fly Fishing: Where to Fish in Georgia 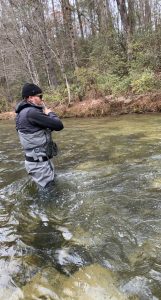 Georgia Fly Fishing: Where to Fish in Georgia

Most of you are aware Trident Fly Fishing is located in the fishing-crazed state of Maine. However, Trident's staff comprises anglers who bring a wealth of knowledge and fishing experience from other regions. We pride ourselves on having diverse fly fishing backgrounds, and we can point most customers in the right direction, regardless of where they are fishing.

Many associate Georgia with the Masters, World of Coke, peaches, college football, the Atlanta Metro Area's traffic, and the World's Busiest Airport. Some great fly fishing opportunities lie beneath the backdrop of skyscrapers, suburban sprawl, and industrial farming. Most of the fly fishing the Peach State offers is within a short striking distance of a major metro area with over six million people.

What makes Georgia such a unique state for fishing is the sheer diversity of opportunities that can break down into four distinct regions: The Piedmont, the Coastal Plain, the Atlanta Metro Area, and the Appalachian Mountains. We break down what each unique part has to offer the fly angler.

When most people fly into the World's Busiest Airport, fly fishing is generally the furthest from their mind, especially for trout. After all, Georgia's humid and muggy climate doesn't seem conducive to supporting cold-water species. However, a year-round trout fishery is located mere minutes from where the Atlanta Braves play their home games.

Despite the inhospitable climate, The Atlanta Metro Area has a few things going its way. Unlike most southern cities built on a flood plain, Atlanta sits at 1000 feet, making it one of the highest elevated metropolitan areas in the country. The Chattahoochee River below Buford Dam and Lake Sydney Lanier is a tailrace with water temperatures rarely reaching above the mid-50s. This has helped establish a thriving, naturally-reproducing brown trout population that millions have access to.

The Appalachian Mountains start in northern Georgia, a little over an hour north of Atlanta, and offer fly anglers a wealth of options. While the two states north of Georgia, Tennessee and North Carolina, receive the bulk of attention (and crowds), Georgia trout waters can be equally productive.

Despite its southern latitude, North Georgia is blessed with higher elevations. During the summer's brutal heat, anglers can take refuge in higher elevation creeks chocked full of rhododendron and filled with native brook trout.

Not interested in wild brookies? There's plenty of public water, with a good mix of wild and stocked fish. North Georgia is also noted for its pay-to-play fisheries with private mountain streams loaded with pellet-fed monster rainbows. It is an excellent way to get acclimated to fighting larger fish.

To the uninitiated, the piedmont might seem pretty dull. Straddled between the mountains and coastal plain, it seemingly doesn't offer the same allure for fly anglers and tourists alike. However, reach deeper below the surface film, and you will find a warm water paradise loaded with hard-fighting gamefish.

Georgia's Piedmont is one giant drainage with major river systems like the Chattahoochee, Savannah, and Oconee flowing through hill country toward the coast. The rivers are fast-flowing and can easily be mistaken for resembling a trout stream found in the mountains.

From a geological point of view, there aren't many areas like it. Where else will you find a landscape dotted with mountain laurel and Spanish moss? Another advantage is that most rivers are within easy reach of Atlanta and Georgia's other major cities.

Another added attraction is unlike South Carolina, Georgia's barrier islands are largely protected and undeveloped. This equals more time exploring uncrowded waterways and less pressured fish for the visiting angler.

We can't mention the Georgia coast without bringing up food! Putting fishing aside, Savannah is a culinary destination worth the visit alone. When combined with fishing, historical sites, and gorgeous scenery, the Georgia coast makes an excellent option for a quick and easy vacation.