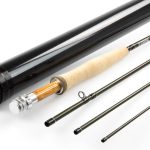 The first iteration of the G. Loomis NRX LP was one of our favorite dry fly rods of all time. The rod was lightweight, extremely accurate, and provided the angler with loads of feedback and feel. In some ways, I think the old version of the NRX LP shifted the industry in a new direction; after Loomis' success with the old NRX LP, rod companies like Sage, Thomas & Thomas, Orvis, and others have put time, research, and money into a moderate-action dry fly rod series.

Building a moderate action dry fly rod has proven difficult. Some of the most famous rod companies have tried to manufacture rods that measure up to the old NRX LP. In our opinion, they've failed. So we were hesitant when we heard Loomis was remaking such a successful series. To say the new NRX+ LP has a lot to live up to would be an understatement. Read on to find out what we liked about the new rod series from G. Loomis, what's changed, and how the 5wt fits into your arsenal.

This new rod series from G. Loomis is characterized by beautiful componentry and some key features that trout anglers will certainly appreciate. The new LP includes a double uplocking reel seat with an Amboyna Hardwood insert, a slimmed half wells grip for decreased weight and increased sensitivity, titanium SiC stripping guides, black nickel/titanium single foot recoil guides, and a rod blank that's deep olive in color. These rods come in a durable aluminum tube that protects the rod during transport and travel.

We cast this rod at 60-feet with two different lines: RIO Perception and SA MPX. The NRX+ LP was much more accurate with RIO Perception at this distance, which makes sense due to its moderate action profile. Perception loaded the rod better and encourage better feedback and feel. We think you'll like this rod even better with SA Trout or RIO Gold at longer distances, although we didn't have the lines to test.

Overall, we were impressed by the 5wt NRX+ LP at longer distances. It's definitely not the best 5wt on the market at longer distances and it doesn't have the same wind-cutting power as some other rods on the market. But we didn't really expect it to. As a moderate action dry fly rod, 60-feet wasn't a distance we expected this rod to do well at, so its performance was a welcomed surprise.

We loved the original NRX LP at 30-feet so we had high expectations for this new rod at shorter distances. The rod landed flies on target almost every cast and provided the angler with a surprising amount of feedback and feel at this distance. Interestingly enough, the rod felt a little faster than we expected... which isn't a bad thing if feedback and feel are still present, which they were. This rod is highly accurate at short distances and throws beautifully tight loops. Accuracy at 30-feet is a major selling point of this rod.

As we pushed the NRX+ LP back to middle distances of 45-feet, its accuracy suffered slightly. Originally, we cast the rod with SA MPX and felt that the old NRX LP had better accuracy at 45-feet. When we switched to RIO Perception, the rod was slightly more accurate but we still felt that the original iteration or the LP outperformed the + LP at middle distances. That being said, the NRX+ LP is definitely more forgiving at this distance which some anglers will surely appreciate.

Finally, as aforementioned, we were pleasantly surprised by the rod's accuracy at 60-feet. While this isn't an important distance for the majority of anglers who will purchase this rod, the NRX+ LP will definitely make longer casts when you need it to. The rod's performance at this distance broadens the uses of a 'moderate action dry fly rod'. You can fish this rod with confidence from the front of a drift boat during hopper season which isn't all that common in similarly-designed rods.

Flex, feedback, feel, and delicacy are arguably the most important features of a dry fly specific fly rod. What anglers often overlook, however, is that a fly line can play a significant role in the feedback/feel you get out of a rod. We found this to be the case with the NRX+ LP. SA MPX loaded the rod at short distances and provided maximum feedback. As we moved back, however, we found that a lighter line with a less aggressive front taper allowed anglers to present flies delicately and with finesse and feedback.

In terms of the flex of the rod, we found G. Loomis' moderate-fast rod taper to be quite pleasant. This is a rod that will flex down into the middle section of the rod relatively easily but still has enough power to get the job done at longer distances or with larger flies. This isn't as soft as a Winston and isn't as fast as a Sage. For us, that's a nice balance. We think you'll like the rod's flex profile, too.

We were skeptical about Loomis' remake of an already-fantastic rod series. The all-new NRX+ LP had a lot to live up to. Because of that, we cast this rod with a highly-critical approach. At the end of the day, this rod is certainly a worthy replacement. Although not as accurate as the old NRX LP at middle distances, Loomis improved short distance performance and made the rod lighter and more powerful. The new series also accommodates a wider spectrum of anglers and casting strokes which we feel will convince even more anglers that Loomis is at the very top of the small water dry fly rod game.